In the mighty world of beer there are a few styles that are considered true classics: the Tripel is undoubtedly one of them. That being said, there is no definitive story about where the name “Tripel” originated from, although it is accepted that this term was first used by Westmalle in the 1950s. One theory is that in the Middle Ages, commoners and monks drank a light alcoholic beer with their meals, and for special occasions they'd choose a heavier beer. Most people at that time could not read, so the brewer would use a cross on the barrels in chalk to denote the strength. On a barrel of heavy beer, there’d be two crosses, XX, (Dubbel) and on the barrel of the heaviest beer, there’d be three crosses, XXX, (Tripel, of course).

What is a Tripel?

There is controversy about this amongst beer lovers, and although the style is quite well defined, the answer is not as clear cut as you might think. Officially, it is a heavy, top fermented beer with a colour that ranges from blonde to amber. Tripels tend to contain between 7 to 9.5%ABV, but they can go substantially higher. The flavour is malty, with sweet, fruity and bitter notes. As mentioned, ‘Tripel’ was perhaps originally used to differentiate from a ‘Dubbel’ or 'double'. However, brewing flavour that is three times as intense or using three times the malt or hops would be impossible. 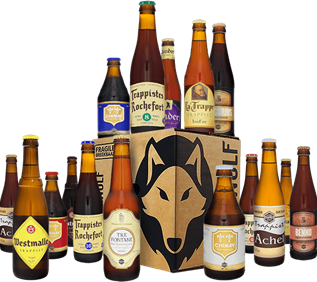 This pack is made of 16 trappist beers from Belgium, The Netherlands, Austria and Italy. These classic and iconic beers are known worldwide for their unique taste full of flavours. Only 12 breweries worldwide brew these trappist beers, which makes them very special. Cheers!

Beer has been brewed in Westmalle since 1836, but it hasn’t always been commercialised. Most of the money originally came from the agricultural Trappist abbey, while the beer itself remained within the walls of the abbey. The Trappists of Westmalle actually saw more potential in selling wine than beer back in the early days.

Things changed when the Vandervelde Act was introduced in 1919, stipulating that no strong liquor should be sold in bars. This was enacted to prevent alcohol abuse among workers, who at that time, all drank a lot of gin. Suddenly a gap in the market emerged, that beer brewers were more than happy to fill.

Many of the heavy beers we know today were created in the period that followed. The monks worked hard and expanded sales to Antwerp. Before long, beer wasn’t just being delivered by truck; the abbey even had its own tramway that connected to the Antwerp-Turnhout tram line.

When Westmalle’s heaviest beer was introduced as a Tripel in 1956 with huge success, other brewers were quick to jump on the bandwagon. Tripels began to crop up everywhere in Belgium. And since Westmalle’s famous Tripel was blond, the new Tripels were too. Although dark Tripels existed and do sometimes still exist, the 'Tripel' style became synonymous with a heavy, yeasty, fruity blond.

You may already be familiar with many other Tripels, such as Chimay and Sint-Bernardus Tripels? Another very notable example of a Tripel is the Karmeliet. This Belgian classic is brewed with three grains—barley, oats and wheat. This internationally distinguished and award winning beer offers a great balance between fruity, bitter, sweet and spicy tastes. The yeast provides the characteristic banana-like aromas and hops add a dryness. This is a beautiful example of this traditional style.

In 1956, the Westmalle brewery was modernised and the recipes of the Tripel were adapted, these are the Tripels we enjoy today.

Under the guidance of brewer Jan Adriaensens, the brewery is continually improving and making new investments to maintain its reputation for high quality brewing. They’ve introduced new fermentation tanks, a new filling line and hot rooms that lie underground so as not to disturb the courtyard.

Though the brewing is no longer the job of monks alone, little else has changed here. It’s important to Westmalle that the beer continues to represent the values ​​of the Trappists and that the high quality is guaranteed. Because make no mistake: dedication to God remains central.  The money geenrated is used to support charities in their own region, as well as for supporting Trappist monasteries all over the world. For the same reason, all their publicity remains very sober: you won’t see any big glossy ads featuring blushing monks anytime soon.

Can you handle it?

How to know it's the real deal