Where to buy them and answers to all your questions

We all know beer contains alcohol, but how much? What do we mean by strong beer? What’s the strongest? How is alcohol created and where does it come from exactly? How do we get different levels of alcohol in beer?

Do you know which are the strongest?

Strong beer and how it is defined

The recognised ABV of a strong beer starts at around 6% of alcohol . This is accepted by many countries, Norway however, consider a strong beer to start from 4.8% of alcohol! As you can see, it's subjective and potentially contentious. Undeniably though, beers with an alcohol volume greater than 6% have a much more intense taste, which is partially determined by the percentage of alcohol. Typically, these beers are intended to be saved and sipped slowly. They are generally more complex beers and not meant to be consumed in large quantities. Some are borderline however, the Belgian Blond, for example, is still quite accessible, generally remaining below 7.5%.

Next up we have the 8.0-10.0% ABV beers; strong Belgian beers, Tripels and strong Blonds. From 8.0% upwards, alcohol plays a fundamental role in taste and in the whole experience of beer tasting. These are beers that should be drunk in peace, it is mainly about tasting and not just drinking. Belgian beer is known for its intense taste and high percentage of alcohol. Tripels are no exception and are an excellent example of this, with an average alcohol content between 8% and 10%. Although the origin of the term is unknown, the accepted theory is that it denotes strength. Tripel was first used by the Trappist brewery, Westmalle, in the 50s when they used three Xs to label the strongest beer in their barrels. This is the same for Dubbel and two Xs. Despite both the moniker “Tripel” and the associated style, strong pale ale, had been used long before that. Unlike a few styles, Tripel is not protected, so although it has become a strict style, there is scope for brewers to mark it with their own artistic flare. When we think of strong Belgian Blond, mostly commonly Duvel comes to mind. This 8.5% beer is an icon of its style and occupies a unique position in Belgium's beer tradition.

Alcohol gets even stronger with most barley wines , Quadrupels and strong Belgian brown beers. These are sweet, warming and generally start at 8.0% ABV, going up to 12.0% (with some exceptions to ~ 15%). They are perfect to be enjoyed alone but also in company. Imperial indicates the strongest and most intense beer in the world, this originates from the Russian Imperial Stout style. Imperial IPA, for example, is a strong, hoppy IPA that starts at 8.0% alcohol. Imperial porter and stout are often around 10.0%, some crazy brewers even push it up to 16.0% 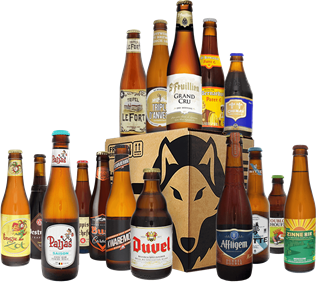 Eisbock and few other extreme beers have alcohol volumes over 12%. Lots of people even question if this is still a beer. If we are being technical than yes, it is still beer if it is not distilled. However, by using this definition, Eisbock then moves into a grey area. This is because Eisbock is made stronger and more intense by cold distillation! There are several techniques to make an Eisbock, the easiest way is to freeze the beer until it's completely frozen and then let it melt it while you catch the drips from the thawing beer. The first bit to melt is the alcohol and other flavours, resulting in a watery tasteless beer on one side and a very strong and flavourful, liquor-like beer on the other. You can even do this at home: pour a strong beer (like Doppelbock or barley wine) carefully into a plastic bottle, make sure the bottle is big enough, frozen beer expands. When frozen, open the bottle and let it melt in a glass. There it is, your own Eisbock.

Snake Venom is currently the strongest beer produced in the world, with no less than 67.5%. Rumours suggest that a distillate is added and for this reason there is debate to whether it can really be called a beer. In 2008 BrewDog released Tactical Nuclear Penguin with 32% alcohol. In the years that followed, a battle raged between the Scottish brewery BrewDog and the German brewery Schorschbock, the latter having the last word with a beer with 57% alcohol (Schorschbock57), through modified versions at BrewDog (55% alc.) where the bottles were inserted in stuffed squirrels !! Finally, the Het Koelschip brewery in the Netherlands, with its beer "Mistery of Beer" raised the alcohol level to 70%, considered by some to reach the maximum possible threshold with the Eisbock technique. However, this beer is now out of production.

How do you make a strong beer?

The answer is quite simple: by adding more raw materials (malts, cereals) during the brewing process. In doing this we generate more fermentable sugars which in turn transform into alcohol (and CO2) during the fermentation phase of brewing. Of course, it is also necessary to use adequate yeasts, powerful enough to transform all the sugars into alcohol. Naturally, a beer will be able to reach 12% to 14% of alcohol. In this category of very strong beers we can cite the Barley wine style, as the iconic Thomas Hardy or the Bigfoot in the United States.

Alcohol volume is always indicated on alcoholic drink labels. A percentage is the way in which the alcoholic strength of a drink is commonly represented, Alcohol By Volume (ABV). For a standard bottle (33 m) of beer with a volume of 5%, it will contain an alcohol volume 1.65 ml.

Another way to indicate the amount of alcohol is as a percentage of the total weight: Alcohol By Weight or ABW. Alcohol always has a lower density than water, which is why the percentage is always lower.

Have you tried this strong, heavenly nectar?