Germans are the masters of light and incredibly refreshing beers

Germany is a proud beer producing country. And quite rightly so, German beer is renowned worldwide!  Lagers are the big thing in Germany, but other well-known styles include, Bavarian wheat beer and gose. There are also many other sub-styles and exciting hybrids to explore. Along with many classic breweries and style icons, Germany has a burgeoning craft scene too, you can read more about it here.

Check out all German beers at Beerwulf 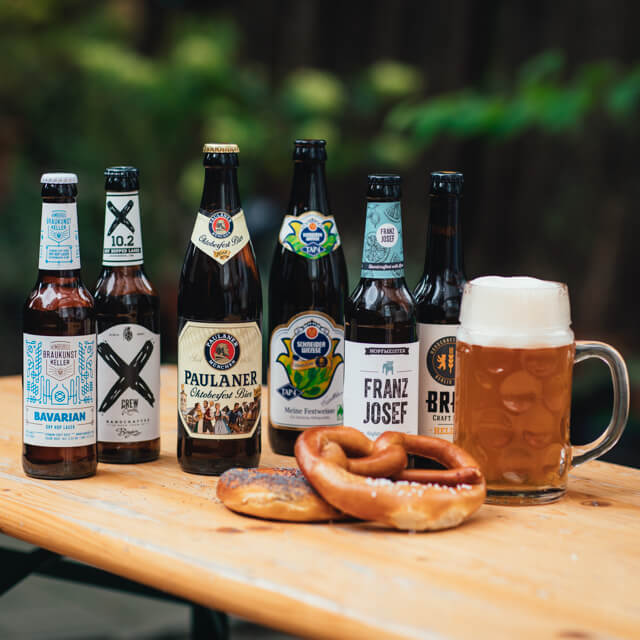 When you think of German beer, the classic image is often of long beer tables packed with rowdy revellers holding huge steins of beer. These scenes are commonly from every beer lovers dream, Oktoberfest. It’s a very unique and exceptional experience that everybody should try at least once in their life!

The majority of German breweries can be found in Bavaria, Ayinger, Erdinger, Paulaner, Löwenbräu, Weihenstephan, Schneider-Weisse, Augustiner-Bräu and Maisel to name just a few. However, newer, more crafty microbreweries such as BRLO and Vagabund are popping up in the capital.

Lagers like pilsner, although originally from Czech, are huge in Germany. There’s a quite big difference between regional sub-styles, north German pilsner is crisp, hoppy and dry, whilst the Bavarian counterpart is helles lager, a light-coloured bready lager.

The Germans are also very fond of wheat beer, top-fermented beers that contain at least 50% malted wheat. Unlike many traditional British beer styles, German beer is loved for its light, refreshing qualities. It’s meant to be social and enjoyed with food. What is the best? Well part of the fun is deciding for yourself!

Flavours of banana and clove

Let yourself be surprised!