Everything you need to know about Oktoberfest and the beer!

When will Oktoberfest 2022 take place?

This year Oktoberfest starts on Saturday, September 17, 2022! The event begins as always with the traditional "Tapping the barrel".

The recipe is based on Märzen (German beer from Mars). Indeed, before the invention of cooling techniques, it was forbidden to produce beer in summer in Bavaria. The breweries, therefore, had to build up their stock before the summer and thus produced, in March, a specific beer that was hoppier and stronger in alcohol, so that it could be kept for around six months in barrels.

The Oktoberfest is the largest popular festival in the world and welcomes between 6 and 7 million visitors each year...

How did it become a festival beer?

At the end of the summer, people still celebrated the autumn festivals and had to drink the oldest beers first – in this case, the Märzen. Oktoberfest beer came a bit later...Munich malt (with hints of caramel) makes it even lighter and more enjoyable than a Märzen. It has a slightly stronger body and is of course brewed according to the law of purity (Reinheitsgebot).

Only a handful of brewers

Since Oktoberfest beer is a protected trademark, only traditional breweries in Munich can call their beer Oktoberfest beer: Augustiner, Hacker Pschorr, Löwenbräu, Spatenbräu, Paulaner and Hofbräu. 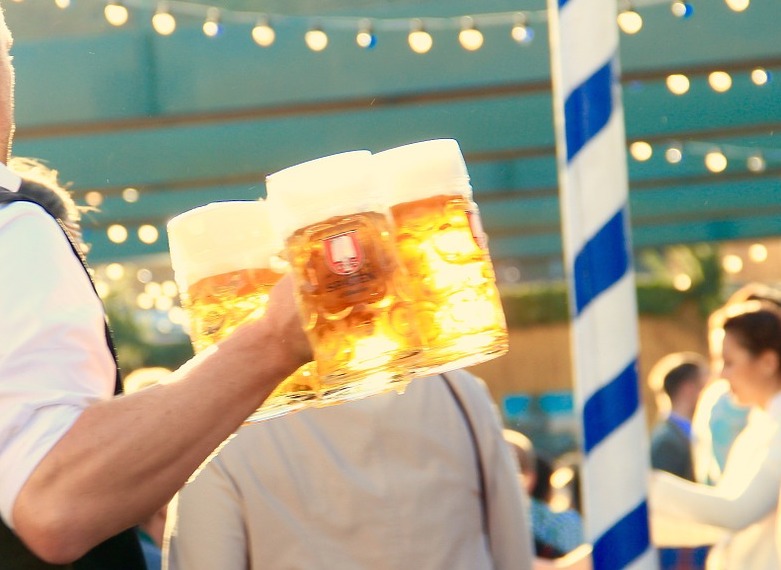 2. What is the strongest Oktoberfest beer?

With a total of 6.3% alcohol, Hofbräuzelt beer is the strongest. The "lowest" alcohol content is the Hacker Pschorr with 5.8%. Other Oktoberfest breweries fall in between like Spaten with 5.9%, Paulaner and Augustiner with 6.0% and Löwenbräu with 6.1% ABV. But be careful because many are not used to strong beer and the effect comes later - so try to drink slowly.

The traditional mug is an icon of the festival because this large glass holds one litre of beer! Fortunately, it has a solid handle... You will however notice the next day pain in the handles - some have even discovered bruises on their hands!

Being a waiter or waitress at Oktoberfest is, therefore, a more than demanding job: they carry between 7 and 12 mugs per round, from morning to evening and during 16 days of the festival. But we can imagine that it is worth it because salaries can go up to £10,000 with tips.

4. How much does a mug of beer cost at Oktoberfest?

50 years ago, the price per litre was still less than a pound. Today it's between £8 and £10... Note that you can't order less than 1 litre either! 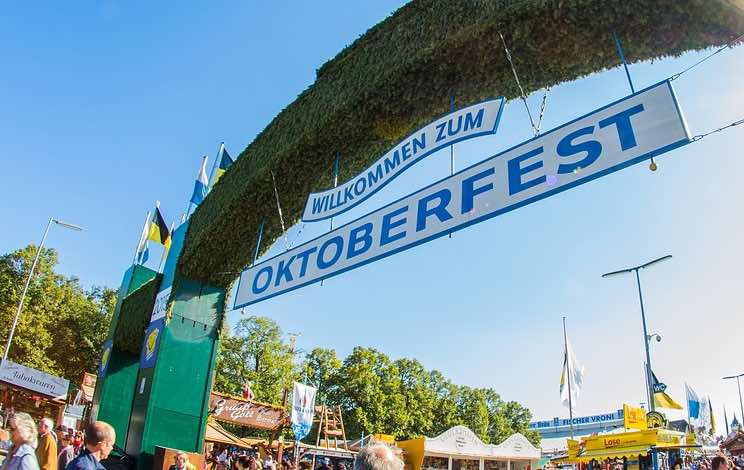 5. The Opening of the festival

The mayor kicks things off!

On the first Saturday of Oktoberfest, the opening takes place in Schottenhammelzelt. This is where the mayor of Munich drinks the first beer. This tradition has been around since 1950 - the mayor at the time drank 17 mugs during the opening. The current mayor Dieter Reiter's record is 2 mugs, so there has been a bit of moderation introduced since the festival started!

6. How was Oktoberfest born?

The origins of the Oktoberfest date back to 1810

During the wedding of Ludwig of Bavaria and Princess Therese of Saxe-Hildburghausen was celebrated on the Theresienwiese for 5 whole days. People were so enthusiastic that the festival is now established every year. Of course, there was beer, however, it was not served on the Wiesn (as it is now), but on the nearby hill.

You'll probably know “Ein Prosit der Gemütlichkeit” when you hear it What is interesting is that this song does not come from Bavaria, but from Chemnitz in Saxony. This hymn was composed by Bernhard Dittrich and has been used since 1912 for Oktoberfest when the composer was already deceased.

With our German beers, including Oktoberfest's flagship beer, Paulaner, available in The SUB keg, you can bring Bavaria right into your home!

One of the official Oktoberfest brewers