How to get good foam on your beer

We all know the glorious image of the “perfect pint”. An ice cool beer with a good beer foam, the very thought of it is mouth-watering. Yes, it should have foam. Despite popular belief, beer with a head of foam is necessary when enjoying a nice cold one. But, if done incorrectly, out of nowhere, the airy, pillowy foam can collapse like a house of cards. You can't explain why but poof, it’s gone. Here we explain how you can prevent that, and how you can impress your friends with the perfect foam head. Read on to get all the tips and tricks.

There are many factors that influence the stability of the foam head. The shape of the glass, the temperature, the raw materials used, and the brewing process are a number of important factors. A narrow lager glass will keep a higher foam head longer than, for example, a wide Trappist glass or a goblet-shaped glass. In a greasy glass, foam disappears like snow in the sun.

Unevenness in the glass causes additional carbon dioxide bubbles to form. Some brewers even deliberately apply 'damage' to their glass, also known as nucleation. Duvel is a good example of this. If you look at the bottom of the glass - where the stem is attached to the glass - you see the logo with the letter D of Duvel. This is deliberate damage. Due to the roughness of the glass, the carbon dioxide bubbles bead upwards and thus nourish the foam head from below.

There are differences when it comes to the best foam head. Take the Netherlands for example. They skim the beer whilst the foam is still flowing over the edge of the glass. Germans on the other hand, they aim to have the foam head protrude about 2cm above the edge of your glass. Skimming? You won't catch Germans doing that.

It's a whole different story in the UK. Not really foam fans. In fact, if a beer glass isn't filled almost to the top you'll get complaints that "it's only half full". In the UK we like to get our money's worth, so to speak. Having said that, traditional British styles such as bitter, usually have a low carbonation and if served from a hand pump, will not have significant head.

But trust us when we say that foam is good! The head acts as a lid, preventing the carbon dioxide from leaving your beer quickly. Without a foam head, the refreshing tingling will disappear almost instantly.

Try draughting for yourself with The SUB 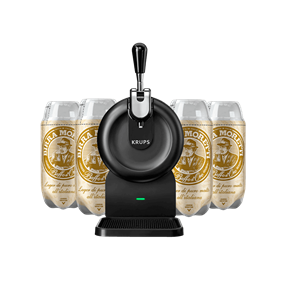 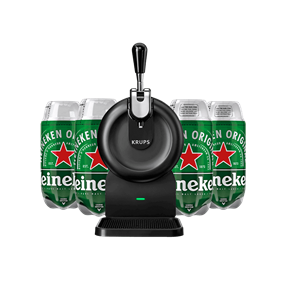 If you pour beer yourself, for example with The SUB, draughting the perfect foam can be a tricky craft to master. However, follow these practical tips and you shouldn't go far wrong!

Draught pints at home with THE SUB!

When served right, it’s perfection in a pint glass