Bonfire Night. A night when tendrils of woodsmoke drift through the air; the bright blaze of a bonfire cleaves the sombre November night; when family and friends gather in awe to see that life-affirming sight that pushes the darkness away.

The night itself is full of music and colours: sounds of bangs, booms, the whoosh of rockets, the crackle of Catherine wheels and the sky being lit up with a halo of multi-coloured sparkles.

But what to drink on such an occasion? As if to match the majestic and symphonic mood of the night you might feel compelled to go straight for a dark and strong beer. But that should be kept for later, during the more contemplative time of the evening when the embers are dying on fire, mimicking the eyes of wild animals in the forest. After all, Bonfire Night is a party as well as a folk celebration. So how about starting with something crisp, refreshing and light on the tongue, but still packed with as much flavour as a firework filled with gunpowder?

Celebrate with Wit and wisdom

Here we have St Bernardus’ Wit, a quenching, spicy, fruity Belgian white. It was originally developed with the help of Pierre Celis, the man who in the 1960’s brought this beer style back from the grave. It has a juicy orange character, a rounded mouth feel accompanied by a crisp briskness, a spiciness from the coriander and a creaminess from the oats.

Bonfire Night also conjures up the aroma of grilling meat. It’s both appetising and thirst inducing at the same time. So maybe now’s the time to go for some rich and strong, and as dark as the mind of Guido Fawkes when he planned to blow up Parliament all those centuries ago. Something like Westmalle’s Dubbel might be ideal, with its dark fruits, hints of toffee and caramel on the nose and palate: a liquid version, perhaps, of the bonfire toffee that used to be handed around when you were young. It’s a beer that complements and collaborates with a plate of grilled ribs. An ironic beer to drink, as well - brewed by Catholic monks and drunk on an evening when effigies of a 17th century Catholic insurgent who tried to blow up the Protestant parliament are burnt.

Or if you’re not ready to embrace darkness as your old friend, but still want something strong and mighty, let’s consider St-Feuillien’s Grand Cru, an elegant and aromatic strong ale. Golden-amber in colour, it is deceptively light on the palate during the initial taste (it is also 9.5%, so take care), but then there follows a sweep of generic fruitiness (rather than just one fruit), a bittersweetness, a dryness and crispness, before an intense yet friendly bitterness in the finish.

Maybe now’s the time to go rich and strong, and as dark as the mind of Guido Fawkes when he planned to blow up Parliament all those centuries ago.

Another aspect of Bonfire Night is that with summer now confined to the lumber room of our memories, it is one of those fiery celebrations that help light our way through the increasingly dark nights ahead before we get to the glitter and chatter of Christmas. The weather might be unseasonably warm, as wet as the ocean, or it can sometimes be brisk, fresh and icy. All are good reasons to gather around the fire and drink beers that reflect the feeling of this time of the year.

You can match Bonfire Night with a smoked beer. Not so much that would be overpowering, but a gentle extra smokiness will do. A rich and warming bottle of Kees Indian Summer DoppelBock might be worth bringing to the party.

This roasty and subtly smoky beer, which uses smoked malt as well as some winter spices such as star anise, cinnamon and vanilla beans, is ideal to drink on a night like tonight. Amber gold in colour, it’s both smooth and bittersweet: a state of mind that we might feel as the memories of summer drift away.

Time for a contemplative beer

And now the evening is drawing to a close, with the fire dying down, while the last firework has squealed its way into the night, and there’s time to consider and contemplate with an equally contemplative beer. Here’s an amber-orange glass of Barley Wine from The Netherlands' Emelisse brewery. It's heavy, fruity and herbal with a hint of spice, warming alcohol and vanilla background.  Check out what Emelisse have to offer, they have brews with different hints of coffee, chocolate and barbecue. Have a happy and safe Bonfire Night. 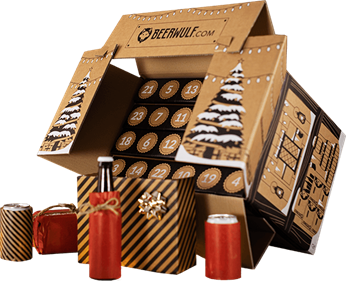 24 beers, 24 craft breweries: with every day comes a new door to open. And with every door is a new surprise beer waiting for you. Enjoy it with friends and family or keep it all for yourself!

So, buy a beer advent calendar, it's a gift guaranteed to put a smile on the face of any beer lover. It’s the gift that keeps on giving!

Click here for more information about the Advent Calendar

*Please note, the bottles will not be individually wrapped.

It's not too late!

Looking for the perfect Christmas gift?

You have come to the right place

Get toasty with a seasonal beer

The most delicious adult treat!