What is beer made of?

Water, malt, hops, yeast and a whole lot of love.....At Beerwulf we love beer. And if you are reading this, chances are you do too. But do you also know what beer is made of and how it is brewed? Making beer can be quite easy, but it must be done very accurately and carefully, a lot can go wrong! Here we explain the basics of making beer: the raw materials.

A brewer once told me, “brewing beer is like having hundreds of different buttons at your disposal, which you can all turn while brewing. And those buttons all influence the end result. ” It is no coincidence that there are whole university degrees dedicated to beer.

How your favourite beer is brewed (how the knobs are turned) depends on what type of beer it is. Nevertheless, the fundamentals of beer brewing are always more or less the same. Here I explain as simply - and as completely as possible - how that works.

How many ingredients in beer?

Firstly, we begin with the 4 components of beer: water, malted grains (usually barley), hops and yeast. The latter is a living organism and is therefore not always seen as an ingredient but is no less essential for the brewing process.

In addition to these ingredients, a brewer can add more seasonings, these come in the form of herbs (such as coriander seeds) or fruit (anything from grapefruit to cherries). 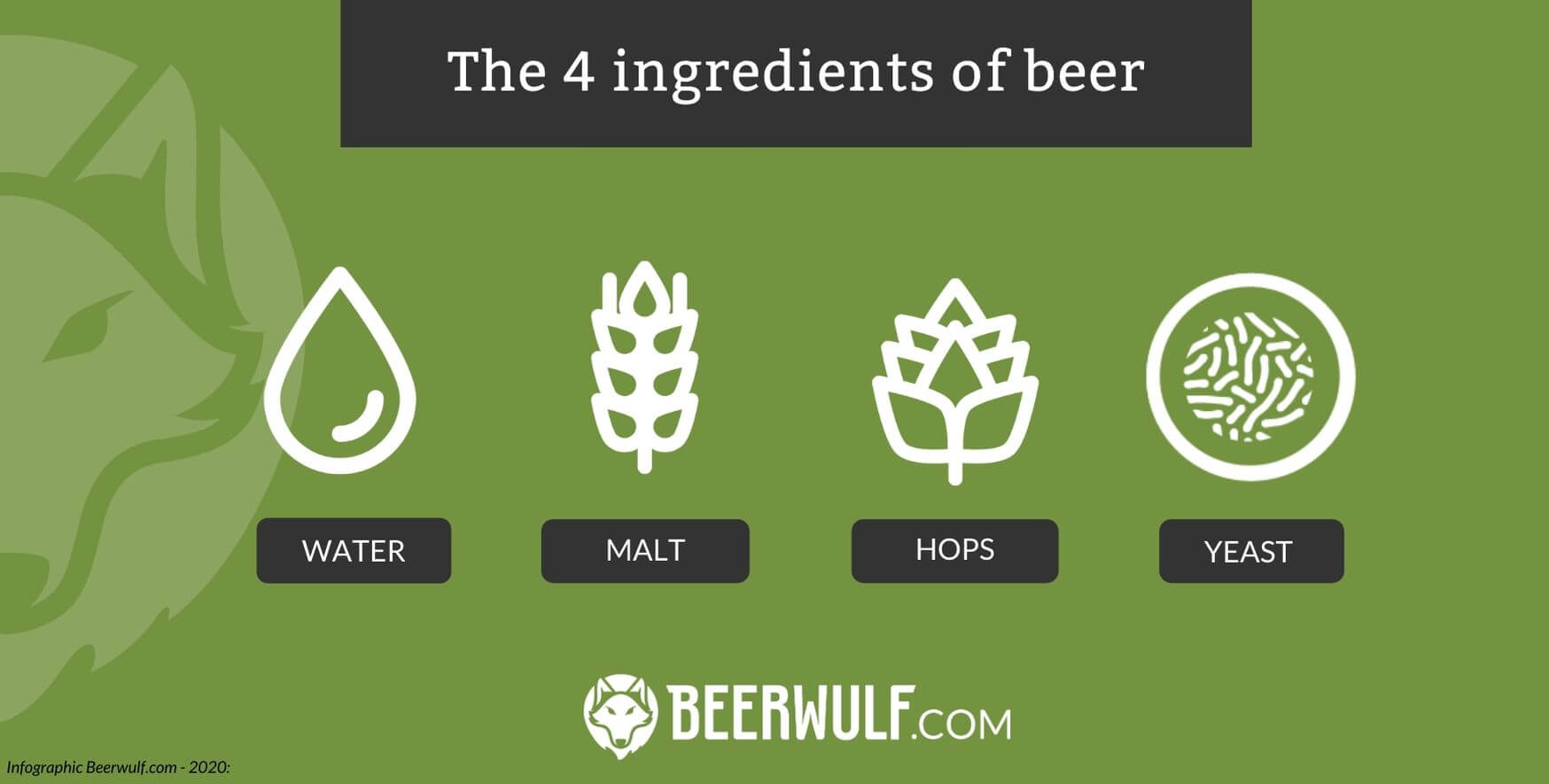 Beer consists mainly of water; in fact it is 90% or more of water.  Water serves as a medium for all other substances in the beer.

The composition of the water (amount of minerals such as iron and lime) can influence the end result in various ways. The two best known examples of this are the water from the Czech Plzen and the English town, Burton-upon-Trent. The very soft water (few minerals) of Plzen is perfect for brewing a smooth and clean beer like Pilsner. The hard, mineral-rich water from Burton-upon-Trent makes the hop bitters in (India) pale ales stand out more.

Brewers can adjust their brewing water and determine the hardness themselves. Burton-upon-Trent even left a verb: Burtonising.

►  Read more about water in beer

Malts are perhaps the most important and impactful ingredient in beer. It is with cereals that you determine for a large part the colour, smell, taste and even the head of the beer. Brewed grains must first be malted, a process that we will return to in the second part of this article.

Barley is the most commonly used malt for beer because the starch-protein ratio is the most favourable, it provides the enzymes needed during mashing (step 3) and because the barley husks are strong enough to serve as a natural filter bed during clear (step 4).

Wheat gives off a soft, bread-like taste with a slightly sour touch. You can taste it well in Weizen and wheat beer. Wheat contains more proteins, which in an unfiltered  White beer and German wheat beer provides the characteristic haze and a thicker head.

Oats provide a velvety, somewhat fuller mouthfeel and, of course, the taste that you may know from oatmeal. Oats are traditionally used in stout ( oatmeal stout ), but increasingly also in other types of beer. For example, in session IPA it provides the necessary body and in a New England IPA it provides the soft-sweet mouthfeel.

Kuit is a traditional Dutch beer type, brewed with at least 45% oats in the malt dump.

Rye provides a slightly spicy, earthy touch to beer and can create a somewhat syrupy mouthfeel. It reminds some beer lovers, depending on the amount of rye, of rye bread. Jopen Jacobus is an example of a beer with rye.

In addition to these grains, other alternatives can be added. Spelt for example, but also corn. The latter is a relatively cheap source of starch and is often used in American-style beers. Corona is a well-known example, or Hite Pale Lager.

The use of rice in beer has the same function as corn,  additionally corn often causes a dry mouthfeel and aftertaste. You can taste it in Asahi Super Dry.

The most expensive ingredient in beer is hops. Fortunately, a brewer does not have to use very much. However, there are of course some beer styles that require quite a lot of hops, IPA is the best-known example.

Hops provide bitterness and aromas (smell). In addition, it has a preservative effect, because it has antibacterial qualities.

There are hundreds of types of hops, roughly divided into 3 types, the name of which also indicates the purpose:

Bitterhop
With a high content of alpha acids that are converted into pleasantly bitter-tasting substances during brewing.
Examples: Apollo, Brewer’s Gold, Columbus, Nugget

Aromahop
With many volatile oils that, depending on the composition of the hop, release, among other things, fruity, resinous, spicy and / or floral aromas.
Examples: Cascade, Centennial, Hersbrucker, Saaz

By the way, it is perfectly possible to brew a bitter beer with only an aroma hop, but you will need more hops to obtain the required amount of bitter substances in the beer.

Yeast is a living organism, of which there are hundreds of species. Beer brewers usually use isolated or cultivated yeasts, which means that all yeast cells are the same. This allows the brewer to best control the fermentation process.

Also called Saccharomyces Carlsbergensis. This yeast prefers to work at lower temperatures, between 5 and 12 ° C and sinks to the bottom of the yeast tank during the fermentation process. The result is a beer with a "cleaner" profile, in which you can taste more malt and hop tones. That is because a lower yeast releases fewer flavours.

All bottom-fermented beers are called grouped under the style “lager” in the UK. The best-known and most widely consumed lager is a pilsner.

This yeast prefers to work at higher temperatures, roughly between 15 and 25 ° C. There are many types of top yeast, each with its own unique characteristics. Top yeast produces more esters, a (often) desirable by-product of yeast that generates “fruity” aromas in beer. Esters are produced by the yeasts during the fermentation process and are influenced by three main elements: yeast characteristics, wort composition, and fermentation conditions. In the beer, esters are usually recognised as fruit, such as banana flavour in a Weizen or pear in a Belgian Tripel. Each variety of yeasts produces its own esters, which is why many brewers have their own unique yeast strain.

Top- fermented beers are called referred to as “Ale” in UK. IPA is perhaps the most popular.

For a long time, this type of yeast was considered an undesired contaminant that brewers tried to keep away from their breweries. It was much later brewers started to cultivate it and use it to their advantage in beer production.

As a rule, this type of yeast is not actively added by the brewer to the beer. After cooking, the brewer pumps the wort into a cooling vessel (large, shallow bathtub), where it is exposed to the open air. The natural yeast cells from the air then come in contact with the wort and trigger the fermentation process. These are non-isolated yeasts.

Brettanomyces (Brett) is seen as a "wild" yeast, although these are often added in cultivated form.  Orval is a well-known example in which this happens.

Brett is a notorious yeast and can be hard to manage, it is also capable of converting the non-fermentable sugars. Brett can take a long time to work its magic, but in the end the Brett will devour everything. In addition, it is a very strong yeast that is difficult to eradicate. This combination means that a Brett infection is often discovered very late in the process and is irreversible. That is why brewers who work with Brett keep this yeast strictly separate from the rest of the brewery.

Other ingredients in beer

The list of other ingredients you can brew with is almost infinite. But there are a number of ingredients that regularly return: