Evolution of the IPAHow did contemporary IPAs come about?

India Pale Ale, or IPA, is the beer style that most personifies the beer revolution. It’s hard to believe but just ten years ago only a handful of people in the Netherlands knew what India Pale Ale was. Today, if you haven’t heard of IPA, you must have been living under a rock! Equally inconceivable is that back then, when a few American textbook examples of this style were presented at the Horecava hospitality trade fair, almost everyone predicted that it would fade back into the history books.

But they were wrong: the IPA is here to stay. This beer style has undergone an astonishing evolution in a short period of time. By now, everyone will have heard the story of the English who wanted to supply their colonial armies with beer, including in India where it was far too hot to brew. Beer was an absolute essential and English soldiers were entitled to their daily pint, but regular English beer couldn’t be preserved for long enough to reach India by ship. By the time the beer had passed the rock of Gibraltar it had already gone off. Adding more hops and alcohol made the beer capable of surviving the journey to India. In spite of the extra hops, the malty taste was still dominant. Colonial IPAs lost their hop aromas before reaching their destination and the aroma was never a priority to begin with. After all, the hops were only there to increase shelf life.

Check out our IPA pack

The India Pale Ale, which was rediscovered by Americans, was an endangered species in Europe by the end of the 20th century. While hardly any English breweries were producing it, a handful of Americans were cautiously attempting to brew old recipes with local hop varieties, such as those that can be found in abundance in the Pacific Northwest. These hop varieties were much more aromatic than many of the European hops. The fresh, crisp and bitter flavour of these hops (Cascade, Tomahawk, Centennial, to name a few), was welcomed by these brewing pioneers. This quickly led to further experimentation. America is known for its ‘go big or go home’ attitude and so both hobby brewers and professionals in America were eager to push the envelope and see how far they could take this style of brewing. The answer is: very far indeed.

Greg Koch, co-founder of the legendary Stone Brewing Company in Escondido, California, claims to be the inventor of the ‘West Coast IPA’, an interpretation that uses copious amounts of hops to completely overshadow the malty flavour of the beer. Though Koch's beer was immensely popular, he refused to sell it in Europe because the shipping time was too long and he feared the beer would lose its fresh, hoppy flavours. He solved this problem by having the beer brewed in a brewery in Berlin. Fresh American beer in Europe – his dream had finally come true.

This story highlights the contradictory nature of the modern India Pale Ale. The style was originally created to give the beer a longer shelf life, yet modern IPAs need to be drunk as quickly as possible! The hops in the original beers were only meant to lengthen the shelf life and added nothing to the flavour. Today, only the flavour is of importance. Many American IPAs are transported to Europe in refrigerated containers, which extends the longevity of the aromas. On the other hand, there’s nothing wrong with drinking an ‘old’ IPA, because, although the hop aromas will be largely lost, the original malty flavour is still present. But don’t leave your IPA lying around for too long. The extremely hopped versions are kind of like the Beaujolais Nouveau of the beer world. If you’re not familiar with wine tradition, Beaujolais Nouveau is a very young wine that should be drunk immediately for an optimal flavour experience. 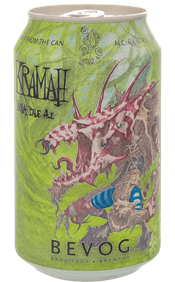 Subscribe to our newsletter! Sign up now for special offers, beery updates and €5 off your next order!