Beer in the stadiumThe beverage for every sport

The World Cup is always a time of excitement in the UK. Suddenly all conversation is dominated with talk of where to watch the next match, social media becomes gets filled with amateur match commentary, and those rainy summer weekends in front of the TV don’t seem quite so dreary.

Truly, there’s little that unites beer lovers in the UK better than football on the big screen, but what are the beverages of choice when it comes to our friends supporting teams elsewhere in the world? In Russia, during the World Championship, there’s no question about it: AB InBev is the world’s biggest brewer and main sponsor, so in the stadium they’ll be drinking Budweiser and Klinskoye brands. But what about the rest of the world?

In Bavaria it’s no secret that people generally like their beer, and the typical Hefeweizen  like Erdinger is most prominent. This unfiltered wheat beer, with the classic fruity taste (banana, apricot) and creamy aftertaste that comes from the used wheat is on the table at every hour of the day: the beer type is considered 'the pride of Bavaria'. The other national treasure, besides the beer, is of course the Bayern Munich team. Arjan Robben celebrated the sixth league title in a row this year, and traditionally the players, trainer and journalists get a beer shower. Paulaner, one of the six classic Munich breweries, is not only the main sponsor of the club, but also ensures that three-litre glasses(!) are filled ready for the moment a title can be celebrated. It’s no surprise that you can also find this beer in all bars in the Allianz Arena, the home of Die Bayern. There will be others, but Hefeweizen is first choice. 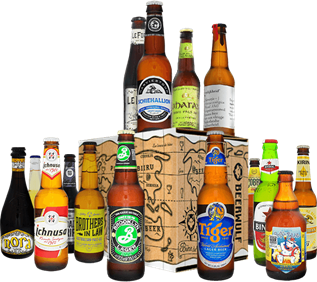 16 beers from around the world, ready to be discovered!

Take your tastebuds on a global adventure! Our World of Beers pack includes a variety of delicious, accessible styles and flavours from across the world.

Americans love sports and beer. The biggest four sports (basketball, American football, ice hockey and baseball) attract hundreds of thousands of people every weekend to the stadiums. Those stadiums are filled with families on wholesome weekend outings, and also beer to enjoy with hot dogs and popcorn.

Traditionally you’d always find American beers like Miller, Coors or Bud (not to be confused with the Czech original). On the waves of the craft beer revolution, however, more and more room has been made for beer from smaller, more independent breweries. Don’t be surprised if you see dozens of craft beers at one of the enormous stadium bars, right next to the standard lagers. I myself once enjoyed an Anchor Liberty Ale  during a baseball game in San Diego - it turned out to be one of the longest in history. The game lasted 22 innings, which took six hours and 16 minutes, and no score was scored for 13 innings. In the end, the rule turned out to be that the sale of beer after the seventh inning was stopped – so tens of thousands of spectators left at 10:30pm, feeling very thirsty indeed.

The Great American Ball Park, home to the Cincinnati Reds, has a bar with up to 60 different craft beers, including Flying Dog and Lagunitas. Citizens Bank Park (The Phillies) also sells dozens. The previously mentioned Petco Stadium of the San Diego Padres, a 'capital' when it comes to American craft beer, offers Ballast Point, PizzaPort, Stone and Lost Abbey. Beer and sport: they go together so well.

In the Optus Stadium in Perth, Australia, they went one step further: there is no beer at all from a global superpower, and all bars sell craft beers from the local Gage Roads brewery. Brewed especially for the stadium, some beers have a low alcohol content of 3.5%, and these are poured alongside the ordinary beers. With typical Australian humor the stadium director announced this special partnership: "It cannot hurt to report that we have 1,500 toilets in the stadium. We are prepared to give everyone a great evening. Enjoying great sporting performances while enjoying a tasty beer is something we are proud to be able to offer."

Here in the UK, we’re doing okay, but still have some way to go before craft beer truly infiltrates the sporting world. Will we ever be able to enjoy a Bellfield Bohemian Pilsner at Twickenham? An Island Records Session IPA at Lord’s? Or a can of And Union SUNDAY at The Oval? I, for one, am still holding out hope.

16 beers from around the world, ready to be discovered!

Take your tastebuds on a global adventure! Our World of Beers pack includes a variety of delicious, accessible styles and flavours from across the world.