Hoppy, intense, arrogant, unique - that’s Stone. The brewery has come a long way since opening in 1996, but the mission hasn’t changed: Stone’s goal is still to brew outstanding, unique beer, while maintaining an unwavering commitment to sustainability, business ethics, and the art of brewing.

The story of Greg and Steve

Founders Greg Koch and Steve Wagner met in LA when they both worked in the music industry. Years later, by chance, they met at a beer workshop and kept in touch. With their shared passion for beer, one thing soon became clear. They needed to open their own brewery.

The two friends decided to set up their brewery in San Diego. They came up with their name during a meeting. “Stone” as a concept was thought to fit well with the beer: natural; impactful; short but powerful.

Then came the logo. Besides being carved from stone, it represents the European inspiration behind some of their first beers and is a guardian symbol meant to ward off evil spirits. In their case, the evil spirits of beer are cheap ingredients, pasteurisation and chemical additives!

Before long, what started out as a small microbrewery turned into a huge and recognisable brand. Today, Stone is among the 10 largest craft breweries in the United States, and they have two locations: California, Virginia. 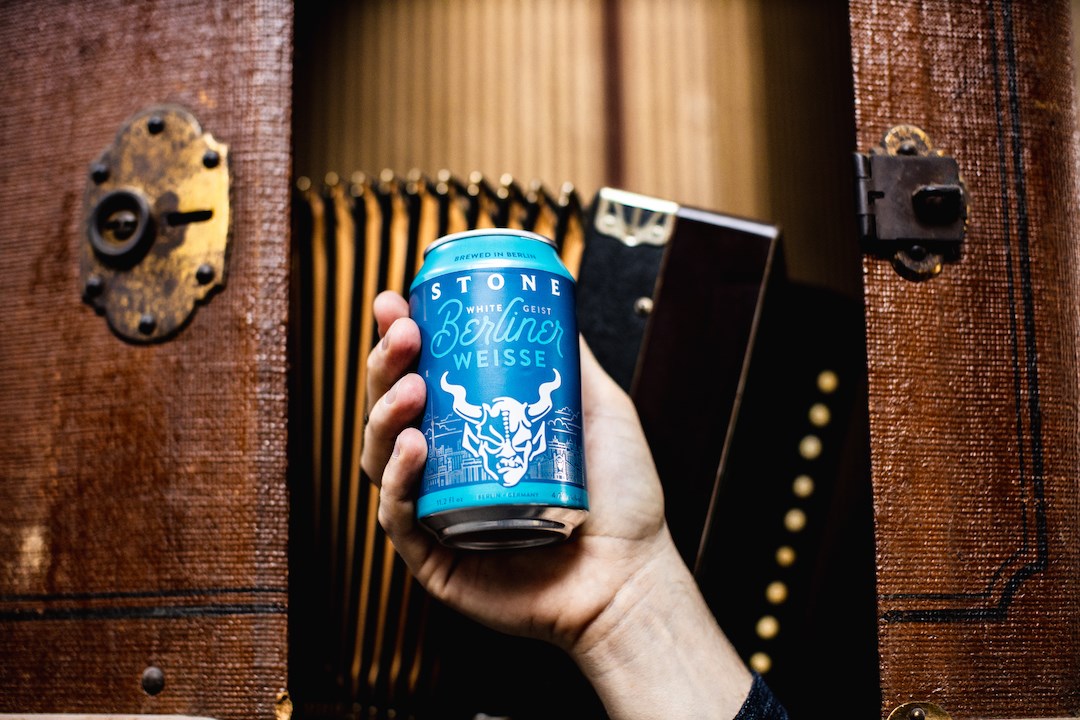 Stone also has a history in Berlin. Founder Greg has explored 130 different locations in 9 countries before to set up the brewery in, across a total of 9 countries, before he settled on Berlin. In 2015, the Stone Brewing World opened Bistro & Gardens in the Mariendorf district, a huge complex of breweries and restaurants. In April 2019 it became clear that Stone's ambitions were perhaps a little too big and too bold. They sold the brewery to Brewdog, who are going to brew their own beers next to those of Stone.

Since April 2018, there has also been a Stone Taproom in the Prenzlauer Berg district. Greg has fallen in love with Berlin over the years. According to him, thanks to its art, music, history and architecture, it is one of the liveliest cities in the world and Stone Brewing fits in perfectly.

The beer that made Stone famous is unmissable in its green can and comes at a stately 77 IBU: it’s Stone IPA. This beer is considered the embodiment of the IPA style from the West Coast - less fruity, more resinous, citrus-like tones and aromas of pine needles.

Also known worldwide is Arrogant Bastard Ale, the liquid form of arrogance. The beer is so arrogant that within the walls of Stone, a separate beer brand has been created: Arrogant Consortia. Enter Night Pilsner, the collaboration with Metallica, is also brewed under the flag of Arrogant Consortia. The Consortia's don’t expect everyone to like this one. In their view, "the question is whether you have enough taste or experience to really enjoy a beer with this quality and intensity."

Stone also released a sour beer, which, in typical Stone fashion, they added extra hops to. This is their Berliner Weisse, the Stone White Geist.

Sustainability and quality remains at the forefront of Stone Brewing in all that it produces. The brewery also champions a sense of harmony between breweries - they prefer not to see others as competition, but as friends. This is a brewery with masses of character, but don’t listen to us: find out for yourself by trying their beers!

Subscribe to our newsletter! Sign up now for special offers, beery updates and €5 off your next order!