Without yeast, there’s no beer. Yeast’s role is to metabolise the sugars from the grain into alcohol, and in doing this it also produces carbon dioxide and, to a lesser extent, flavour and aroma compounds.

Simply put, when creating alcohol, fermentation is the metabolic process by which sugar is converted into alcohol and carbon dioxide by yeast.

It is the process above that give makes beer both alcoholic and carbonated. It is in fact the second process that takes place in brewing. There are hundreds of yeast strains, each with different characteristics, but of those strains there are three main types: ale, lager and wild. We’ll overlook the wild ones because here we’re looking at ale versus lager.

Ale yeast is top-fermenting. The ‘top’ part is a reference to how the yeast can actually be seen on the top of the tank in the first days of fermentation. This was more evident when all fermentations were done in open vessels, from which the yeast could’ve been skimmed off the top. Bottom-fermenting lager yeast does not typically give such a vigorous froth in fermentation and instead collects at the bottom of the vessels (which brewers used to collect and re-use – before they properly understood it, they called it ‘zeug’, which meant ‘stuff’). Ale developed in the ambient brewing temperatures of northern Europe, whereas Bavaria’s (and later central Europe’s) use of cool cellars enabled the cold-loving lager yeasts to thrive. 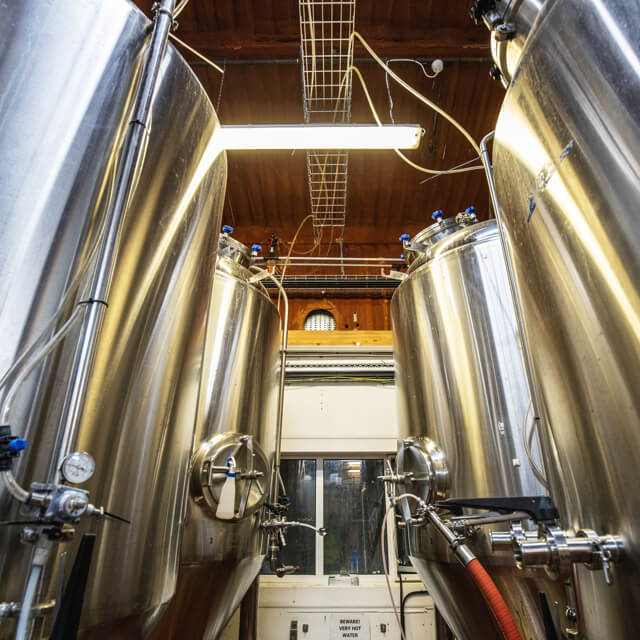 More important than the presentation of foam is the temperature at which a beer ferments at, and for that reason a new classification of warm and cold fermented might be more relevant. It's the temperature that will have a more significant impact on the characteristics of a beer.

Ale yeast likes to work in warmer temperatures. For a classic ale, that might be between 16-24ºC, with 18-20ºC being the common temperature, and it might take 3-5 days to convert the grain sugars into the intended level of alcohol, it then needs a week or two to condition. Make it colder and the yeast will be sluggish and less effective.

Lager yeast prefers the cold, working best between 6-12ºC, and will ferment beer in 7-14 days, then requiring several more weeks to ‘lager’ or mature – this conditioning period is when the flavour gets cleaner as the yeast will remove some of the aromatic character naturally given out during fermentation. If the yeast is too warm then it will produce many more negative flavours.

The flavour impact is that typically the warmer the fermentation the more yeast characteristic will be in the beer. A traditional lager, like Pilsner Urquell, Sapporo or Fourpure Pils, presents very little yeast flavour or aroma. An English Ale, especially beers like Fuller’s London Pride produce a spicy fruitiness like marmalade. However though not all Ales will have aroma or flavour from the yeast, take Pohjala Must Kuld for instance.

And then there are the cool-fermented ales, like Kölsch, which also then undergo an extended cold conditioning like a lager, which gives it a cleaner flavour. Or there’s California Common which is warm fermented with a lager yeast (one specially evolved for warmer temperatures) and gives out some fruitier yeast flavours.

For the most aromatic expressions of ale yeast, we can look to Belgian ales or wheat beers, which are ales which ferment at a warmer temperature (maybe 25ºC) and that produces the fruity and spicy aromas and flavours (known as esters and phenols). Westmalle Tripel is wonderfully fruity, with hints of banana, then it has a peppery finish; Leffe Blonde is much more phenolic and spicy in its flavour; a classic German Weissbier like Schneider Tap 7 is smooth with banana-like fruit, while a Belgian white beer is more spicy and peppery, with those yeast aromas enhanced by the addition of coriander and orange peel.

Yeast gives us alcohol and in some beers, it also gives us some extra aroma and flavour. We can talk about yeast as top and bottom fermenting, which produce ales and lagers respectively, but the key thing is the temperature and the time that’s taken to make the beers.

Lagers from around the world

Discover the history of the world's favourite beer style