White beer versus Weizen beerIs there actually a difference?

Isn’t White beer and Weizen the same thing? Belgian White beer is brewed with wheat and the German word for wheat is, indeed, Weizen! They’re both wheat beers, of course, but there are essential differences between the two beer styles.

This is really a battle between two major beer-producing nations: Belgium and Germany. A battle which begins with the use of wheat. For a White beer, brewers use un-malted wheat and for a Weizen, 50% wheat malt. Wit beer also contains less wheat than a Weizen. It’s the wheat that produces the typical sourness of this beer. Wheat contains less starch and more protein, which results in a robust head. Both beers range from opaque to cloudy, which is caused by the wheat: this is because the grain has a bodily structure containing elements which make it more difficult to filter.

The type of yeast also plays an important role in differentiating these two beers. Both beers are top fermented, but a Weizen is brewed with a special Weizen yeast, a yeast culture which produces flavours of clove and banana. A Weizen beer complies with the ‘German Purity Law’ (the oldest commodities act in the world), which bans the use of herbs, spices and fruits in the brewing process. It’s therefore the Weizen yeast that ensures the subtle, sweet and fruity character of the beer. You won’t get this banana taste in a White beer, which is more likely to contain flavours such as citrus and coriander. During the brewing process coriander seeds and curaçao peel are added - this is the peel of a bitter orange.

Say the words White beer and most people immediately think of Hoegaarden. And rightly so, because it was in this region of Belgium that brewer Pierre Celis gave the beer a new lease of life in 1966. In the 18th and 19th centuries, White beer had become one of the main Belgian beer styles. In the area around Leuven, it was produced by more than 30 breweries. But around 1955 this had temporarily come to an end... Hoegaarden is to this day the best known White beer in Belgium. In The Netherlands, the Korenwolf from Gulpener is a popular White beer - both good alternatives to a Pilsner in warm weather.

Weizen is a style of beer which originated in Germany, where terms such as Weisse or Weissbier are also used. A Weizen, despite its name, isn’t always white in colour but can also be dark. Well-known Weizen beers are brewed by Schneider and Weihenstephan. Different variations of this beer exist, such as clear and hazy, light, blonde and dark.

If we’re talking about external characteristics, there are similarities as well as differences. Both beers are classified as cloudy. A White beer is often slightly lighter in colour (pale to light blond) than a Weizen (pale to amber). Both beers have a nice robust head, but the head of a Weizen is creamier with a higher volume.

If you smell both kinds of beer, you’ll notice that White beer has a refreshing, fruity aroma of citrus, sometimes with a hint of sweetness. A Weizen contains spiced and sweet aromas (from the yeast) such as clove, nutmeg, banana and vanilla - you’ll be able to taste these in the beer itself.

The fresh citrus tones and herbal notes of coriander are dominant in White beer, while Weizen is better known for its tones of banana and sometimes clove.

White beer is a sweet beer with hints of acidity, citrus tones and the herbal flavours of coriander and other spices, while a Weizen is sweeter, maltier, and mildly acidic, containing tones of banana and yellow fruits as well as clove. If you focus on the mouthfeel of the beers, they appear to be comparable, and both have a thin to medium body. There are bigger differences in the aftertaste: a White beer has a herbal, mildly acidic and dryer aftertaste than a Weizen, which has more of a spicy, tangy, slightly sticky aftertaste (from the sugars). There’s hardly any difference in alcohol percentage, or none you’ll be able to taste: White beers contain slightly less alcohol at 4.3-5.2% compared to Weizen beers which are around 5-5.6%. 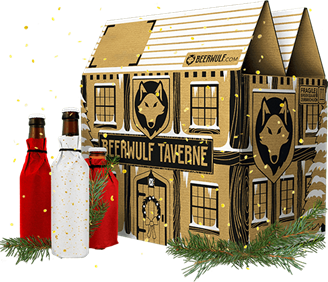 24 surprise beers to count down to christmas!

24 beers, 24 craft breweries: with each day comes a new door to open and a special new craft beer bottle or can waiting to be enjoyed with friends and family.

This gift is sure to put a smile on any beer drinker’s face this year. Cheers!