Beer and romance: a good combination? We think so, and our Valentine's pack is proof of that. With 16 different beers, it’s the best Valentine’s gift for beer lovers! Read on to learn about the contents of the pack and discover why beer is such a romantic gift.

Flowers are by far the most popular gift on Valentine’s Day. Beer is way more original, but what about giving your special someone beer with flowers?

Start by tasting the first French beer, Mélusine Love and Flowers - the name says it all! It’s a tasteful, hoppy white beer with subtle floral hints.

Another beer in the pack that goes well with a floral theme is La Violette du Mont Blanc. Brewed with local violets and cranberries, this one is completely different to its French counterpart. You will be able to taste the flowers and berries right away!

The first romantically named beer of the pack is Saens Zoentje, the flagship beer from Breugem, which translates as “kiss”. The beer is a beautifully hoppy blond; deliciously fruity and accessible with a not-too-intense bitter aftertaste.

The king of love? That has to be the King of Hearts from London brewery Wild card. This is a fresh and fruity beer, low in alcohol and brewed with citra-hop, which gives the beer citrus tones.

It doesn’t get much more romantic than Moor Amoor! Much like beer, love is something you can never have enough of. Moor Amoor is a very tasty beer with a relatively low alcohol percentage. The flavour comes mainly from the roasted malt, which gives off chocolate and coffee, much as you would expect from a porter.

3. Fruit beer as an aphrodisiac

Some fruits have been considered aphrodisiacs for centuries. Female-run brewery Gebrouwen door Vrouwen brewed their Strawberry Blond with one such fruit: strawberries. The shape and colour of strawberries has long represented romance, while in ancient Rome, the strawberry was a symbol of Venus, the goddess of love, beauty and desire. The beer encompasses this well. It’s a blond beer at heart with a subtle strawberry fruitiness, so not an overly sweet fruit beer.

Lindemans Pêcheresse on the other hand is a lot sweeter, but it’s also a little more fresh with some extra sourness. And it’s full of peachy flavours, of course. In many cultures, the soft peach is seen as lust-inducing. Where that idea comes from, I’ll leave to your own imagination. 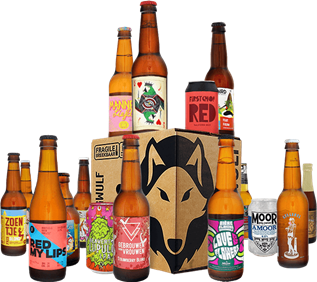 4. Red beer: the colour of love

You can show your love with red roses, but if they’re not your thing, luckily, you can do it with beer, too. With Red My Lips from Brussels Beer Project, for example, an amber-coloured Session IPA. The beer is hoppy, fruity and bitter, without being too heavy.

Or, demonstrate your desire with RED from First Chop, an amber (or dark red) coloured beer with a good balance of fruity, spicy notes from the hops and toasted malts.

5. Beers of a feather flock together

Fuut-Fieuw (the Dutch version of a wolf whistle, or “twit-twoo!”) might not seem a particularly romantic name, but it is in fact the epitome of eternal fidelity. After the mating dance, the female “Fuut” (also known as the Grebe, a freshwater diving bird) gives the male a water plant as a thank-you, which seals the marriage between the two birds for life. This beer from Bird Brewery is also a thing of natural beauty: light-footed with a low alcohol content, and fruity from the hops with a nice bitter aftertaste.

Most owls are also loyal to each other, choosing to mate for life. Show your commitment to a loved one with Miss Hooter from Het Uiltje (which translates as “the owl”). The hearts on the bottle radiate a lot of love, while the beer itself is fruity, bitter and lower in alcohol, with a lot of taste mainly coming from the hops.

Love and madness are often intertwined as themes in literature, art and music - take Crazy Love by Van Morrison, for instance, which is possibly one of the most romantic songs ever. Some of these brewers were seemingly inspired by this fact.

Or, try Lellebel from De Eeuwige Jeugd. Lellebel is a Dutch word meaning "A fun-loving, hedonistic girl who will keep her impetuous youth forever," says the brewer. The beer is loved by many: light in colour, not too extreme, but tasty with aromas of tropical and citrus fruit.

The most out-there name comes from Frankendael: T.I.T.S. The picture on the label conjures up the image you probably thought of first, but T.I.T.S. officially stands for “Three Idiots Tripel Spiced”. This firm triple is brewed with coriander, orange peel and Sichuan pepper, which is not really a pepper, but more a herb that gives extra citrus flavours to this fruity, spicy beer.

Craft beer really can make a beautiful gift, especially if you give it with a little love. Mannenliefde is a good option in this case. This saison from Oedipus brewery is fruity and spicy, as you can expect from a saison. And with its pink label, yellow lettering and colourful cap, it just looks beautiful!

When you come to drink Lupuloid from Beavertown, that’s where things get really arty. There’s a kind of alien hop invasion happening on this pink can. This IPA is a hop invasion, that’s for sure: it’s richly hopped, very fruity and has a perfect bitter aftertaste. An IPA done by the book that’ll make any beer lover happy!

Get romantic with beer

The best way to get romantic with beer is to hold a Valentine's Day tasting session with the beers from this pack. Get comfy, light candles and put on some romantic music. Choose from 4 to 6 beers that you find the most romantic from this pack, and put them in the right order: from least to most alcohol is usually a good rule. Take two glasses and share the beers together. And there you have it: a romantic beer tasting!