Fresh IPA: why fresh?"Fresh is so much better!"

Which beer style has been at the forefront of the most recent beer revolution? IPA! This is mainly due to the flavourful hop aromas that beer lovers appreciate so much, in which you can recognise citrus fruits, pines and tropical fruits. You can taste these aromas best when an IPA is fresh!

We recommend everyone to try fresh IPA, which is why we have teamed up with Kompaan, Het Uiltje, Frontaal and Oedipus to offer fresh IPAs straight from these brewers!

In this article, the brewers will get the chance to talk about their IPA and the importance of freshness. And from the 7th of January, you'll be able to order them at their freshest!

The stories about where India Pale Ale comes from are now just about as diverse as the amount of different IPAs that can be tasted today. What is certain is that the style originated in England. It was after a long journey overseas, when they discovered the preservative workings of hops in beer. Beer that contained more hops were still of excellent quality after travelling. A large part of those journeys were from England to colonial India, so these hoppy export beers were soon known as India Pale Ale.

However, the current IPA is not a storage beer. Rick Kempen, Dutch beer sommelier, wrote about this: "The hops in the original beers were only meant to extend the shelf life and did nothing with the taste. Today it is only about that taste. "

Founder of the Haarlem brewery 't Uiltje, Robbert Uyleman says: "We try to raise the Netherlands a bit when it comes to that. We give our IPAs a shelf life of only 4 months. It is not that they are not good after the BBD, but fresh is just so much better! The flavours of the hops quickly reduce, especially if they are not kept refrigerated. "

Jaap van Pruijssen (Brewery Frontaal from Breda) agrees: "Correct storage is essential, this means storing in the cold and dark. When this happens, the flavour of the beer is preserved. The volatile hop oils provide the aromas but will become less over time. " 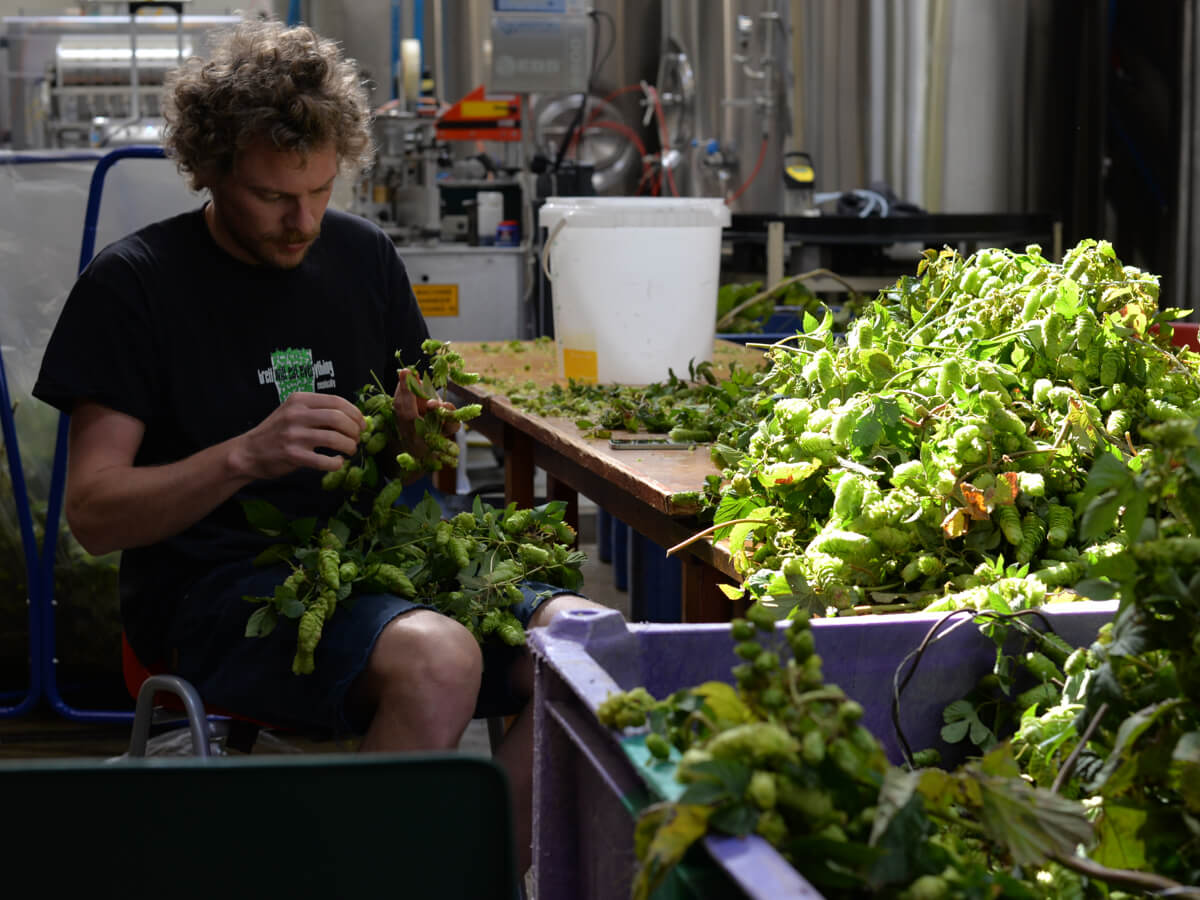 Sander Nederveen of Oedipus (Amsterdam) adds some nuance: "I have found that it depends on personal preference what the optimal age of our IPA is. That is why you can always find the filling date on our bottles, so that everyone can see the age. If you drink a fresh Gaia, the aromas from the hops will be at their strongest. If the beer is kept longer, the malt flavors will take over a bit more. "

Jasper Langbroek of the Haagse Kompaan describes the taste evolution of their relatively heavy Handlanger (8.2%) as follows: "The Handlanger tastes optimal within 3 months after filling. Due to the higher alcohol percentage, it can last a little longer. But a fresh handlanger is very fruity and crispy. After a few months, the beer becomes somewhat rounder and less expressive. Our advice: Drink FRESH! "

"So always make sure that you keep them cool, but also in the dark. UV light breaks down the fragile taste of hops and shortens the lifespan even more, "says Robbert. For this reason, 't Uiltje fills their IPA in cans: "Then you have no oxidation due to UV light and a hoppy beer will retain its juicy, fruity flavours much longer."

How do we ensure the freshest possible IPA?

Lisette Olde Scheper (purchasing at Beerwulf) can best explain this: "We have made strict agreements with the brewers, so that the beers are filled as soon as possible before delivery to our warehouse on 7 January. You can order them from Tuesday 8 January and drink a super fresh IPA from home on Wednesday! "

Which fresh IPAs are we talking about?

Het Uiltje comes with Moose on the Loose, a' New England IPA 'from the New England region on the East Coast of America. Robbert says: "It is a fairly new, emerging style that is characterized by extremely high fruitiness. All hops are processed at the end of the brewing process. So you have almost no bitterness and a lot of hop aroma. "They have chosen a single hop edition:" We only use the relatively unknown Idaho-7 hop. Think of tropical fruit, peach, mango and apricots, "concludes Robbert.

From Kompaan you can taste Handlanger. We have the inside scoop on this one: this Double IPA has now been renewed. Jasper told us about it: "The new Handlanger is brewed exclusively with American hops: Amarillo and Simcoe. We use 19 grams per liter, and ended up with a hefty 70 IBU (bitter units). Of course, the beer is dry-hopped to achieve more fruitiness."

The IPA leading the current beer revolution is the American interpretation, such as Bulldog from Frontaal. Jaap states: "It is an IPA as we like to drink it, with a little more alcohol than usual, but it’s secretly well-drinkable. It has a fine bitterness and a lot of aromas, coming from the mainly American hops Magnum, Cascade, Centennial, Chinook and Simcoe."

Gaia from Oedipus won gold during the last Dutch Beer Challenge. Brouwer Sander says, "Gaia is our interpretation of a West Coast IPA, with a firm malt base and bitterness (60 IBU). The bitterness comes from classic American hops: Cascade, Centennial, Chinook, Columbus and Amarillo. But more important are the resinous, pine and grapefruit-like flavours they give, with a layer of yellow and tropical fruit."

Do you want to taste fresh IPA?

This is your chance to taste all the flavours and aromas from IPA's: fresh! Order them as soon as possible, because the sooner you have them, the fresher!

You're subscribed! Thank you.