Traditionally wine has been the more mainstream choice in restaurants, especially in fine dining, to pair with a meal. But did you know that beer can also be the perfect match to many meals? …and arguably sometimes even better!

A dish with strong flavours is likely to overpower the flavours of a more subtle beer. Sometimes the flavours will disappear completely. And this also applies the other way around. A heavy beer of 10% alcohol will probably bulldoze a simple salad or mild cheese altogether.

The intensity of a beer is determined by several factors:

You can't adjust the intensity of a beer that easily. After all, the beer has already been brewed. You can play with the temperature a bit, though. This is because a lower temperature represses the flavours and aromas of a beer slightly. If you drink a beer at a slightly warmer temperature, you will notice this increases the intensity.

The intensity of the dish, however, can be influenced a little more easily, for example by seasoning with salt, pepper and herbs. 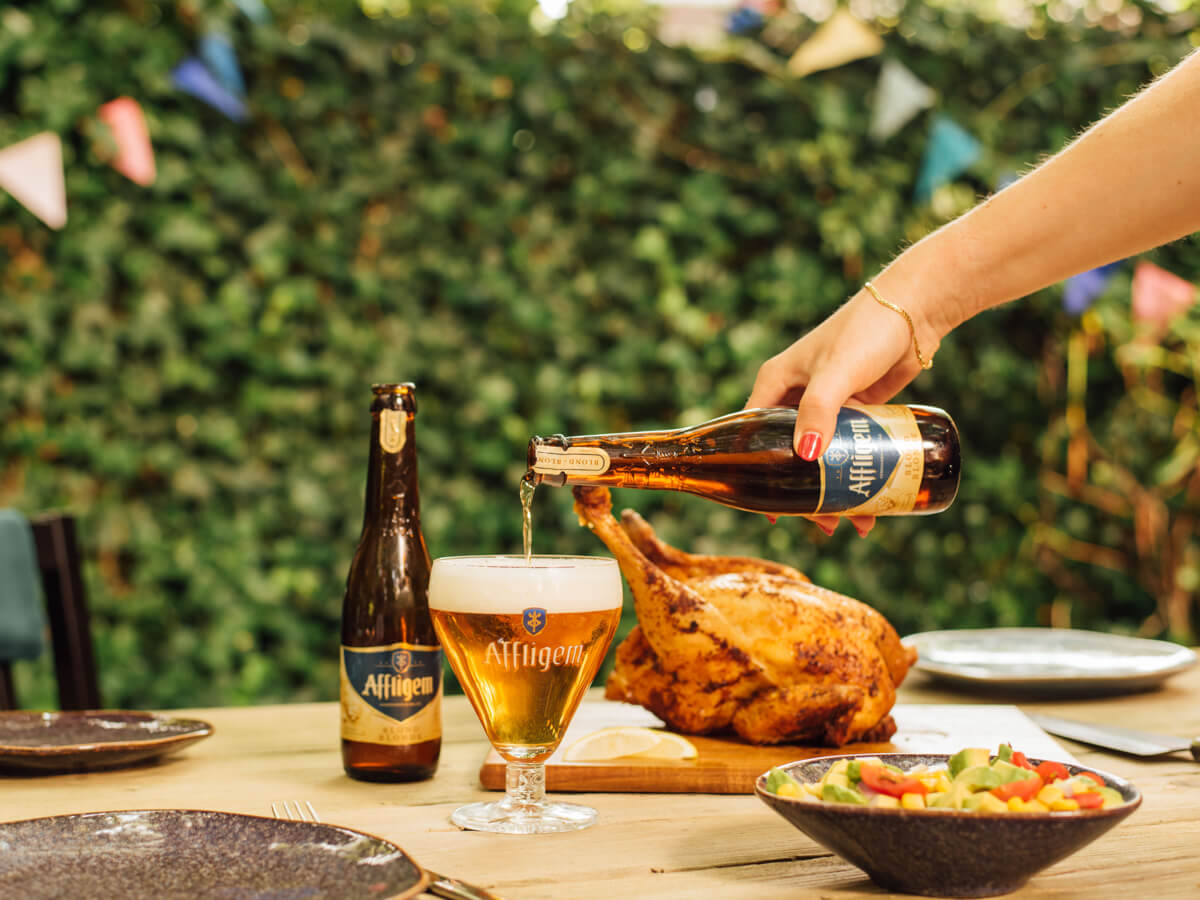 Whereas for intensity you look to find equal matches, with flavour you can play around a bit. Certain flavours in the beer balance, temper or enhance flavours in the food. And vice versa of course.

Sweetness in beer is largely down to the type of malt and the presence of any residual sugars. Lightly roasted malts such as those found in a Dubbel or Bock give beer a caramel-like character. Sweet beers are often used in food pairing because they balance spicy and sour flavours.

Bitterness in beer is usually a result of the hops, like in the case of an IPA. A dark roasted malt (porter and stout) can also impart a certain bitterness. Bitter beers can be a bit more difficult to combine, however there are still beautiful combinations that can be made. Fats and proteins (think of fish) absorb the bitterness of the beer.

Be careful with spicy dishes, because bitterness and spiciness reinforce each other. This can be great but also too much.  Be careful you don’t want to be overwhelmed by those two flavours and not taste any of the complexity from your food or beer.

A beer can be sour in different ways. For example, wheat has a slightly sour taste, you can taste this white beers and German Wheat beers. Other beer styles such as gueuze get their sourness from the fermentation method.

You should also be careful with acid/sour because, like bitterness, sour flavours can reinforce each other. This works fine in moderation, but you don't want it to take over. However, beer can be a great accompaniment to a salad with an acidic dressing, like those made from vinegar.

If you can taste salt in a beer, this is usually because salt or salty water has been used. The German-style gose is a well-known example of this. However, there are also brewers who add salt or, for example, samphire to their beer to give the beer an interesting salty depth.

Salt acts as a flavour enhancer for sweet (think chocolate with salted caramel) and tempers bitterness.

Umami means something like savoury in Japanese. You often encounter this fifth basic flavour in cheese, meat and fermented products. A good example is marmite or anchovy.  It does not occur often in beer, although it can occasionally find it in dark beer types.

Matured and sweeter will combine best with dishes that have strong umami flavours. Generally, we recommend you avoid bitter beers.

Many types of beer contain carbon dioxide to a greater or lesser extent. A style like Tripel is known for its high carbon dioxide content, although this does of course differ depending on the beer. A nice quality of carbon dioxide is that it cleanses your palette. Your mouth is, as it were, rinsed clean by the carbon dioxide. This can be great with fats! You might be familiar with that fattiness that can be left in your mouth, well highly carbonated beers will cut straight through that.

As mentioned, be careful with spicy dishes with hoppy or bitter beers. Although conversely you also need a beer that has enough oomph. A more subtle beer, like lager won’t work either, because a spicy dish will be too intense for that. We suggest you look to combine spiciness with a beer that has a spicy taste for example, a wheat beer and in some Tripels. The spicy coriander seed will be heavenly with spicy dishes.

You may not be familiar with the Maillard reaction by name, but you will know how delicious a piece of meat turns when you fry it.  That gorgeous browning is what we call Maillard.  This is due to a reaction of a carbohydrate with an amino acid (protein). Something similar happens with sugar, which turns into caramel when heated.

These two processes also take place when kilning and roasting malt, hence why you can taste them in your beer. Because of this connection a juicy fried steak or darker meat fits perfectly with a slightly darker beer like a Dubbel or Quadrupel, where you can detect these caramel flavours. 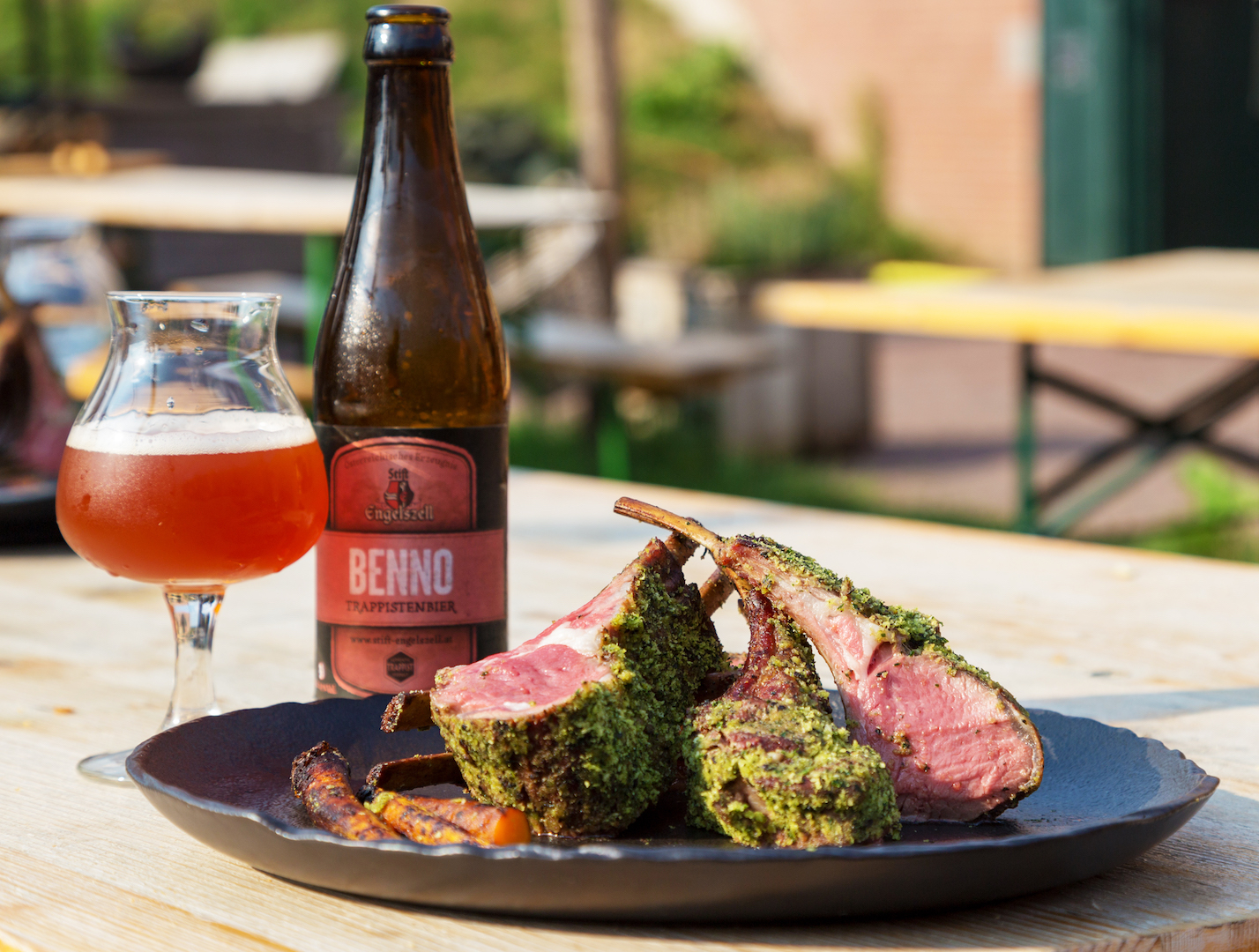 For the finishing touches, look for a flavour hook. A taste hook is created because a certain ingredient from a dish forms a good bridge with an ingredient or a taste from the beer.

You can look for flavours that are comparable or complement each other. For example, the chocolate notes from a stout go well with a chocolate pudding. Those flavours can then reinforce each other. Or take a look at the well-known flavour combination, chocolate and banana. Take a chocolate-flavoured beer and serve it with a banana split. Or vice versa; take the banana aroma of a wheat beer and eat with some chocolate.

Another well-known flavour hook is a saison with camembert. Both the beer and the cheese have a "barn" like taste. Trust us, it sounds a little funky, but well worth a try.

The most important advice we can give you here: experiment! You can write books about possible flavour combinations and hooks, but you just have to experience it!

Summers BBQs don't get better than this!

The "Godfather" of summer drinking

The art of tasting