So, what’s the flavour wheel for?

You know when you drink a beer and there’s something in there that you can’t quite figure out? An aroma you can't place? We have all experienced the frustration of identifying something familiar but not having the words to describe the taste on the tip of your tongue!

Or you know those times when you have a beer and there’s something unusual about it. You’ve got a vague sense that something’s not-quite-right. Only you don’t know what it is. You tried looking it up online, but are faced with science words you've never heard of, don't understand and certainly can’t pronounce.

But there is something you can use to help, for a long time there’s been a beer flavour wheel. This established beer flavour wheel, introduced in the 1970s by brewing chemist Dr Morten Meilgaard is great and an internationally accepted tool. On the wheel each separately identifiable flavour characteristic has its own name; similar flavours are placed together, and no terms are duplicated for the same flavour. Flavour wheels graphically represent not only the flavours found in beer but also the aromas and mouthfeels. It also sets out standardized terminology to describe the nature of the beer.

However, it can be a bit technical for an amateur drinker. There are lots of words that won’t be familiar if you are newish to beer, some are hard to understand, and some words will feel strange, like estery and astringent. It also doesn’t give an indication of where those things are coming from – does that mean it is grain or yeast, or has something gone wrong in the beer?

One day Mark Dredge decided to reinvent and rework the established wheel, taking the style and idea of the former but with the sole purpose of making it simpler. Using the wheels for whisky, coffee, and wine, he noted relevant beer words and different ingredients. This was not intended to be a replacement for the original but something more approachable. Something all beer drinkers could make sense of. The focus was on the specific ingredients and processes of beer, looks at esters and off-flavours, considers mouthfeel, aroma, flavour, and the general experience of beer.  A wheel aimed at giving the everyday beer drinker the vocab to describe what they are experiencing.

The “new” beer flavour wheel was visually appealing, simple to use and intuitive in colour. In short, it simplified what a flavour is and where it might come from by lining them up with how those flavours came to get into the beer. All the four main ingredients are there: hops, water, malt and yeast. You’ll also find fermentation and how this can impact the beer. Additionally, it includes textures, tastes, flavours, and off flavours.

The beer flavour wheel is for everyone to use, even if it’s just as a beginner wheel before moving onto the more scientific original. It aims to give you the words that might be on the tip of your tongue, but you can’t quite spit them out. Give the wheel a spin next time you can work out what it is that you’re smelling or tasting. 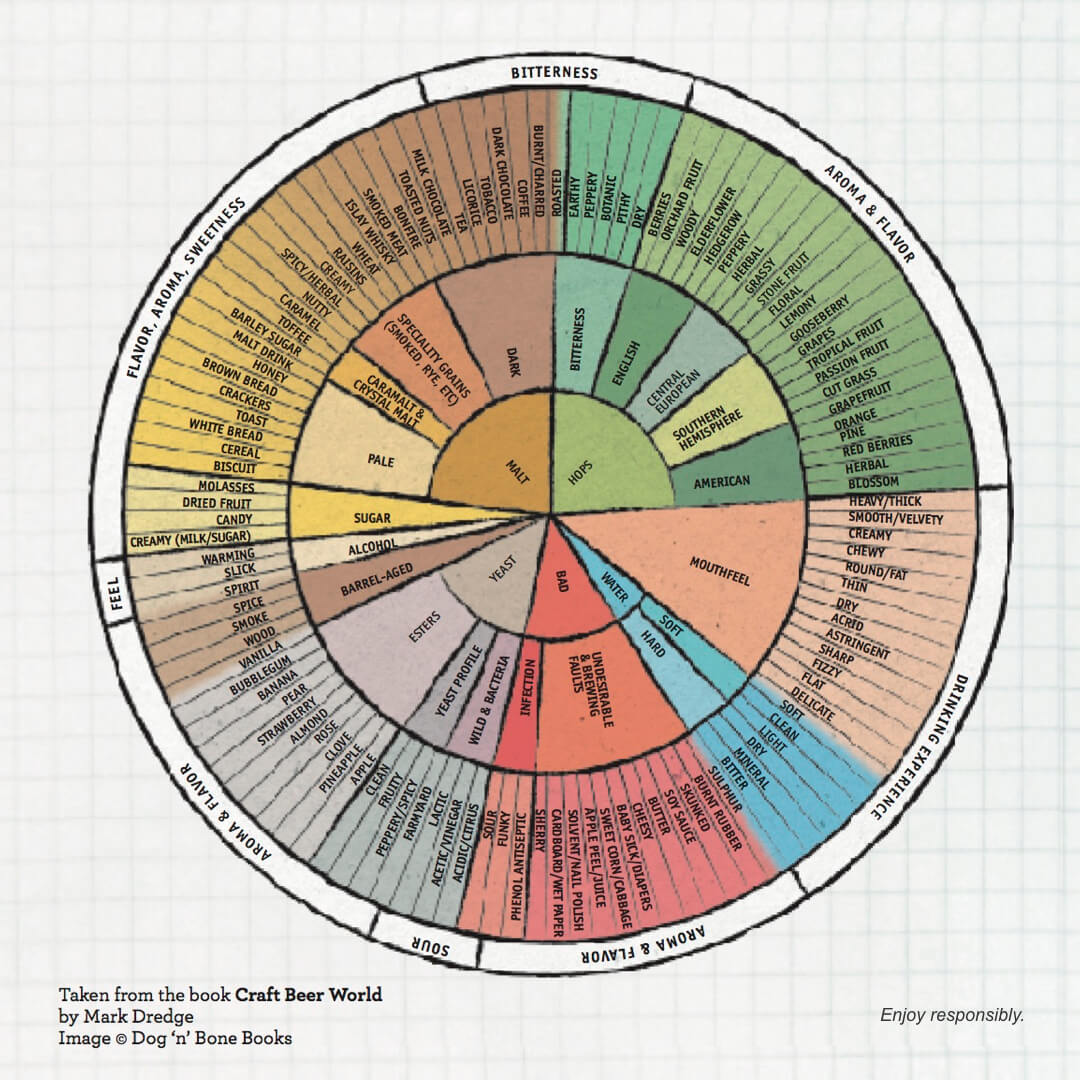 Let's take a look at some beers and how they relate to the wheel.

First up, Westmale Tripel, known for its fruit aromas and pleasant spiciness. The aroma isn’t hop-forward, instead you want to be looking at the fruity esters, where banana, pear, almond and phenolic clove come through. That's the lilac/grey section of the wheel. Then you can look at golds, the lighter malt colours on the wheel – biscuit and toast and perhaps some honey.

The body is slick with alcohol, rich with malts, it has a lot of carbonation and ends really dry with some of the grassy, herbal European hops coming through alongside the spicy yeast.

Hops come first in this one, that's the green section. It's a classic West Coast IPA, so mostly American hoppy notes. Lagunitas IPA is known for being very piney but you may also detect herbal, grapefruit and citrus notes from the Cascade Centennial & Chinook hops. A golden colour, the caramel malted barley brings a special depth. The dominant flavour is biscuity malt and caramelised sugar. That's the yellowy-gold colours on the wheel.

Look first to the darker malts with chocolate, toast and coffee flavours, plus the bitterness they bring (a different kind of bitterness to the hops). This is brewed with oatmeal, giving a soft, creamy and smooth mouthfeel.  Light sweetness on the palate and a dry finish.

Find the beers at Beerwulf

The art of tasting

A treat that's hard to beat!