The beer with the pink elephant

If you are looking for a strong blond beer from Belgium, you have hundreds of beers to choose from. However, if you want to try a real icon of the style we have just the thing. One of the best-known is Delirium Tremens from Brouwerij Huyghe. We are going to tell you all about the beer with the pink elephant.

The legacy of the pink elephant

The popularity of Delirium is not least due to its strong brand image, in particular the logo. You can recognise the soft blue background with the pink elephant anywhere. Like the name, the logo is a reference to a drug withdrawal phenomenon. It could also be a reference to the hallucinations that Dumbo has in the Disney film of the same name.

Either way, it has been a brilliant marketing move, as the elephant is very much sought after! All kinds of merchandise from bar mats, bottle openers to golf balls, socks and boxer shorts have become very popular. Do not be surprised if you see people walking around in a slightly intoxicated state with a pink elephant hat at a Belgian beer festival.

THE BEERS OF DELIRIUM

Delirium is not actually the name of the brewery itself, but is a brand of the "Brouwerij Huyghe" brewery which is situated in the city of Melle in Belgium. According to them, beer was brewed there as early as 1654, but was bought in 1906 by their founder Leon Huyghe. The company was initially called Den Appel brewery (La Pomme in French) referring to the place called Appelhoek. His son and son-in-law took over from Léon in 1925 - back then producing mainly lagers. In 1936, the brewery was renamed Brasserie Léon Huyghe after their father and the beer has been brewed under the name Huyghe ever since.
Delirium Tremens was introduced in 1988 and quickly became the brewery's most popular beer. So popular, in fact, that the recognizable blue color with the pink elephant is depicted prominently on the front wall of the brewery. However, it is not the only beer the brewery produces - with the blonde beer "La Guillotine" and the abbey beer "Averbode" also being produced here. In addition to these pilsners, you can also find exotic fruit beers such as the "Mongozo" brand here - they truly are some talented brewers! 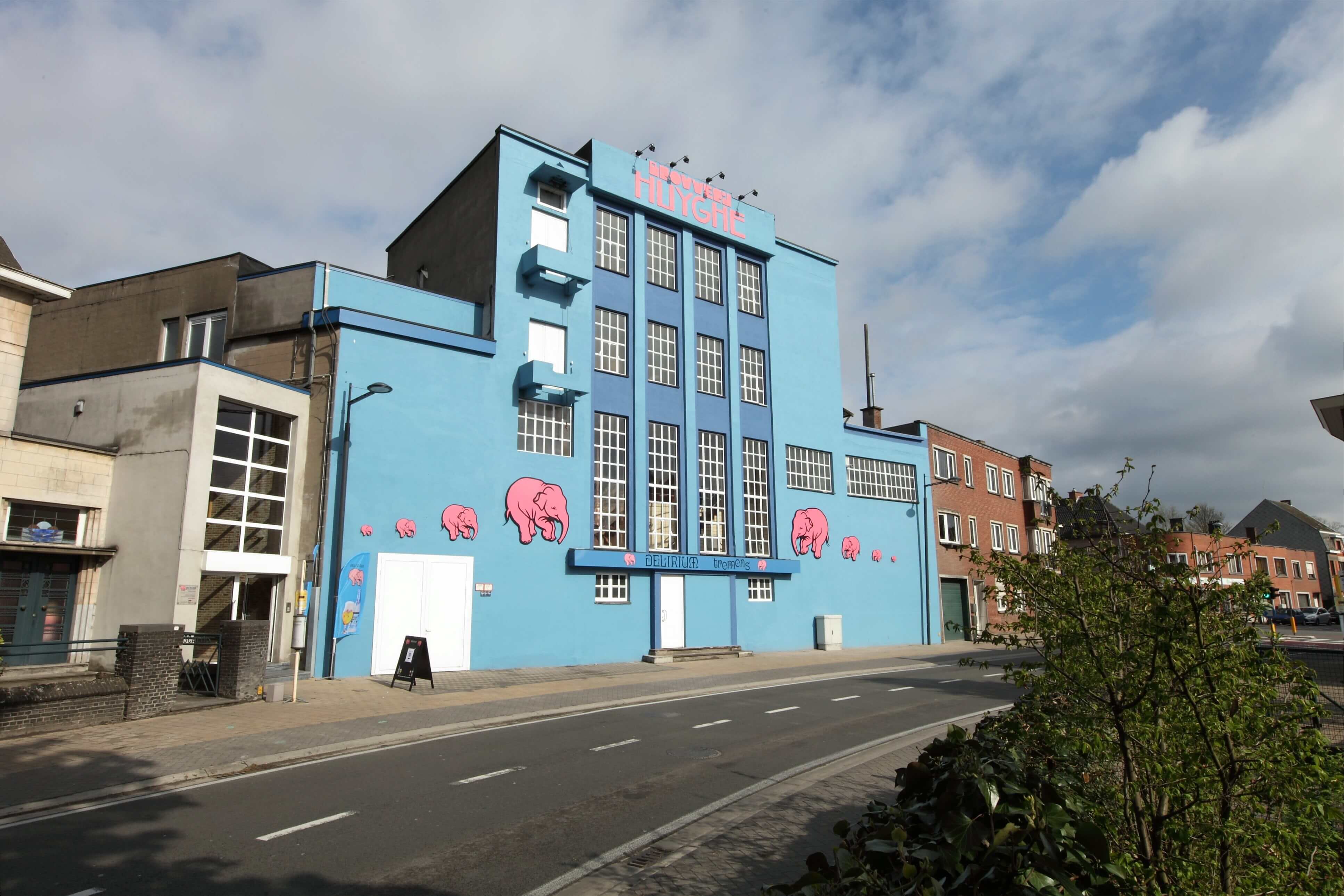 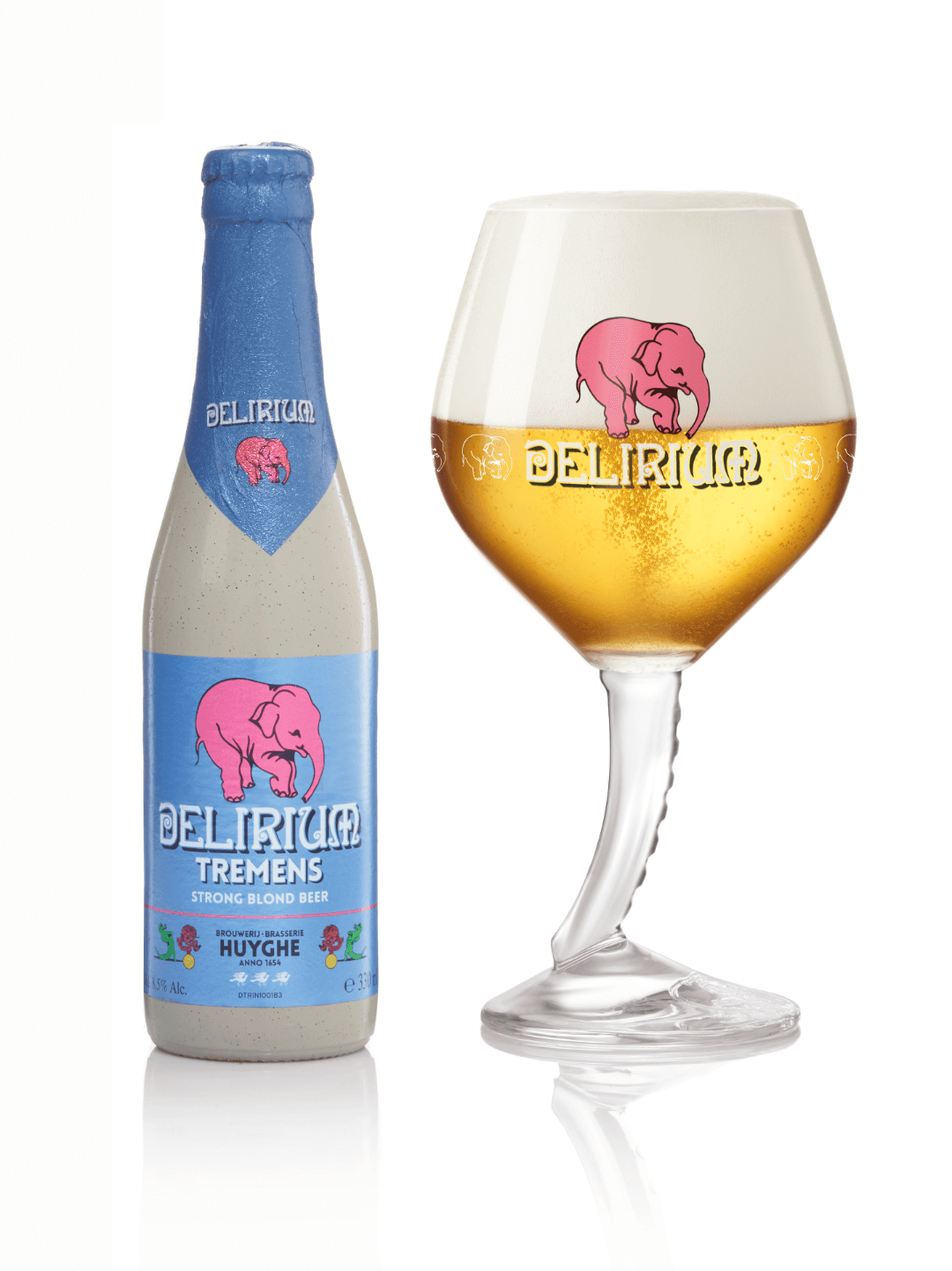 The original and most famous Delirium beer is the Delirium Tremens. "Delirium Tremens" comes from the condition with the same name, withdrawal symptoms that one can experience when abstaining from alcohol.

Delirium Tremens is a heavy blond beer, with 8.5% alcohol, a lot of carbon dioxide and a typical Belgian, fruity taste. According to the brewers, this mainly comes from the three different types of yeast that are used in the brewing process. The finish is sweet and slightly spicy.

The bottle of the Tremens is also iconic, because it is reminiscent of the old-fashioned pottery in which beers used to be served. The Delirium Tremens goblet has an asymmetrical base with ridge stem that is said to resemble an elephant's trunk. 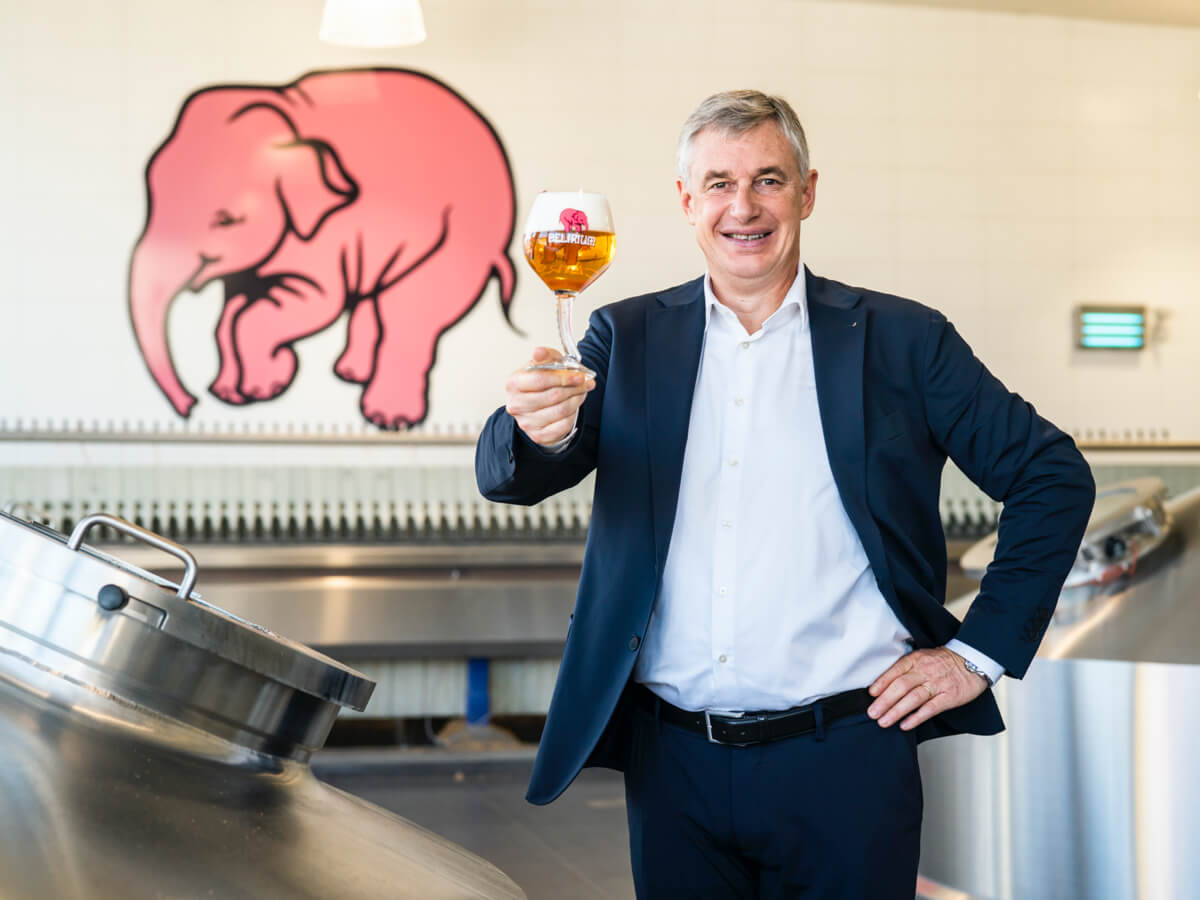 Delirium Tremens is the most famous but it is not the only Delirium beer produced at Brouwerij Huyghe. You can also find these beers in our Delirium beer case. The assortment includes:

Delirium Red: According to the brewer, an "excellent dessert beer" with a good balance between sweet and sour, with a fruity aroma of cherries.

Delirium Argentum: An amber-coloured beer that, thanks to notes of citrus and grapefruit and an existing hop scent, looks more like a (Belgian) IPA.

Delirium Nocturnum: A quadruple with clear notes of caramel, mocha and chocolate. An aftertaste that is both spicy and warming.

Delirium Christmas: As the name suggests, the Christmas beer is mainly brewed around Christmas. Caramel, spicy and 10% alcoholic.

Delirium Tremens was named "best beer in the world" in 1997 and won a gold medal at the World Beer Championships in Chicago in 1998. So what are you waiting for? Try it today!
Cheers!