A mysterious experiment. A unique hybrid of bottom and top-fermented beers from Dutch Brouwerij Noordt.

These beers are available exclusively at Beerwulf.com!!! 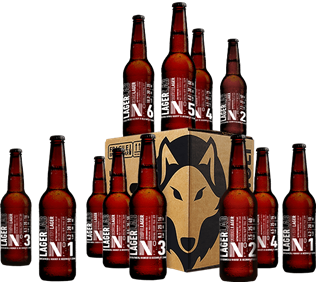 What is top fermentation?

What is bottom fermentation?

A bottom yeast prefers to work at a slightly lower temperature, about 7 ° C to 14 ° C. This yeast takes longer to convert all sugars in the wort. The rest period between end of fermentation and filling is also longer, usually 3 to 6 weeks. This to allows the yeast longer to clear up unwanted flavours.  This period is called lagering (after the German term 'lagern' = saving), hence the name lager.

Is it possible to brew a Belgian top-fermenting classic with a bottom fermenting yeast? Not only that, but will all the characteristic fruity and spicy aromas and flavours of a top fermented beer remain intact? Peter Rouwen of Brouwerij Noordt was interested by it too, and dared to indulge his curiosity. It is for that reason, "I have regularly declared myself crazy because I couldn't predict in advance whether I could keep all the flavours," he explains.  Before embarking on his mission he had no idea of the outcome, "or whether I would be able to make such a high alcoholic beer at all, without all the wrong substances getting into. "

In order to achieve those high alcohol percentages he had to train the yeast. "We started with a beer of 4 percent. We reused the yeast and then we had them eat increasingly difficult beers and eventually we ended up with a beer of 10.5%. And we succeeded, and that worked out very well."

How will the LagerLab beers taste?

The difference in taste between top and bottom fermented beers is significant. A bottom yeast has a longer fermentation process and produces less flavours. Top yeasts generally produce more flavours (esters and phenols). Typically warmer temperatures produce  more yeasty characteristics that are also fruity and spicy.  Yellow fruit, pear, apple, banana and cloves are very typical. The result of bottom yeasts is often a more subdued and subtle beer, they are cleaner and crisper.You can expect those spicy fruit flavours in Belgian ale styles, but if it’s brewed as a lager? What will the end result be? With a less prominent yeasts flavour, perhaps the malt and hop will shine through? One thing we do know is, Peter and his team have ensured us that the LagerLab beers will have plenty of flavour! Find out for yourself. Whatever flavour that may be …