Nothing is more delicious than the orchard flavours of Strongbow Original Cider and Dark Fruit. And now you can enjoy perfectly poured draught pints of cider from home too!

Strongbow Original is one of the nations most popular ciders. Made with the finest apples, Strongbow has a distinctive golden hue and crisp apple flavour. Strongbow is “Refreshing by nature” and famed for its bittersweet, dry taste of Herefordshire apples. It’s tantalisingly delicious, sharp and tangy, the perfect pour for every occasion.

Refreshing and crisp apple cider combined with a blend of blackcurrant and blackberry flavours. Dark Fruit delivers refreshment and a clean finish, at 4% ABV it's the ultimate crowd-pleaser. Strongbow is perfect right now; when we are not yet into the summer months but longer, lighter days are on the horizon. The fruity, orchard flavours are a great addition to any evening or meal.

And even better, you can tap Strongbow Dark Fruit from home with our SUB Kegs! 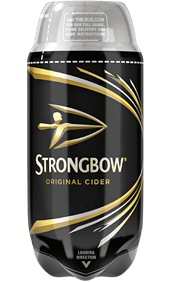 It is an alcoholic drink that is made from fermenting apples, more specifically with the fructose in the juice. Given the wide variety of apples (sweet, sour and sweet-bitter), different combinations can lead to the creation of different flavours and colours with varying profiles and depths. There is huge variety. That's why cider is suited to many occasions and due to the wide range, there is a variation to suit every person! Although any apple can be used, apples used in cider production are usually smaller than table apples and have a higher concentration of tannins. For this very reason, they are aptly named cider apples. Ciders can be categorised by two main styles, standard and specialty. The latter being modern and heritage ciders. The main differentiator here is the type of apple used. Traditionally of course, cider was made from any strain they could resource so “style” did not play a huge role although it was usually Crab apples. Crab apple is often used, mixed with others like Cox and Russett.

Cider was around during Greeks and Roman times, but the most "modern" version dates back to the Middle Ages. Today, the production is mainly concentrated in Europe, thanks to its agricultural, climatic and historical conditions. The countries with the highest production volumes are The United Kingdom, Spain and France. Interestingly, The United Kingdom has the world's highest consumptions per capita. It has definitely evolved in other continents such as the United States, where it has now become quite popular. Here, “hard cider” is used to distinguish alcoholic cider from its “sweet cider” counterpart, which are also made from apples but is non-alcoholic. In Italy its expansion was slowed down by historical factors. Cider has been produced since the Fascist period of the early 1900s, but to facilitate the production of wine, taxes were introduced on the production of craft beer and cider.

Cider is analogised with beer, because of the colour and possibly the presence of carbon dioxide but realistically it is more similar to a wine. They are both made from fermented or fermented sugars from fruit juice (apples and grapes, respectively).  Sure, they have things in common, but these are two completely different drinks.

With beer, however, these sugars come from various grains and not from fruit. You can use barley or wheat for this, but also rye or even corn and rice. These grains must first be malted, the grains germinating and forming enzymes that can convert starch into fermentable sugars.

What unites the two drinks is the conversion of sugar into alcohol and carbon dioxide by fermentation. As with beer, this is an extremely careful process, in which fermentation also partly determines the taste. After fermentation, the cider is further flavoured by a resting period of a few months. This is usually in wooden barrels, which we also know from some beer styles.

Making cider is actually a relatively simple process. Unlike beer, with cider there is no brewing process. Instead, the juice from the apples is put in barrels where it can ferment easily. Fermentation usually starts from the wild yeast on the apples, but sometimes white wine yeast or alternatives are added to accelerate the process.

After the fermentation has stopped, you can determine this when there are no more bubbles of gas, it needs to mature for about 2-3 months.  The alcohol in ciders can, of course, vary considerably but they tend to have an ABV between 4% and 8.5%. There are always exceptions, brands from the USA have been known to create ciders with 12% ABV!

How to drink cider?

Cider can be dry or sparkling, sweet or sweet, young or aged, light or dark. It is very diverse, it goes well with so many different dishes, from the savoury to the sweet. It is sweeter than beer but contains less alcohol than wine. Just like with beer, how and when you drink a cider depends very much on the type you drink. A fresh or sweet cider is great on a warm terrace, with a healthy amount of ice cubes. But a heavier cider will go very well with food. You can even cook with cider; in the UK cider & Pork is very common. Or make a cider cocktail with whisky. You choose!

From Kriek to Berliner Weisse