For most of us, festive pop music is like cabbage on your Christmas dinner plate: middle of the road, a bit sad, and no-one’s favourite; still, we don’t bother trying to dress it up any differently and for some strange reason, the whole thing wouldn’t feel right without it.

It’s true, holiday music really does mark the start of the festive period. At home, in the shops, on the radio at work: those old favourites start drifting out and into our consciousness reminding us it’s time again to start buying gifts and planning festive get-togethers. Come mid-December, though, most of us have heard more than enough of “Fairytale of New York” and “Last Christmas” to see us through 'til next year.

So, here at Beerwulf, we’ve made our own playlist of exclusively head-banging, bell-jingling, beer-drinking, festive (and not-so-festive) songs. From Metallica to the Cranberries, this one’s for the air guitarists and the beer lovers alike!

What are you waiting for? Plan yourself a toasty evening at home with the Beerwulf Christmas Pack accompanied by our BEERWULF X CHRISTMAS Spotify playlist for ultimate festive enjoyment. It really is the most wonderful time for a beer! 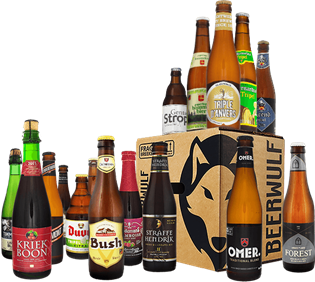 16 beers from the Belgian Family Brewers

Lover of Belgian beer? Then this is your pack! All these beers have been brewed by members of the Belgian Family Brewers: independent brewers who brew authentic beers. With this pack you will discover the diversity of the Belgian beer landscape in all its facets. Enjoy the typical Belgian heavy beers, from Walloon Saison, Flemish Blond and lambic. Cheers!

Impress your friends with some factoids this Christmas

Q. What is the most played Christmas song of the last 50 years?

A. “Santa Claus Is Coming to Town," written by Fred Coots and Haven Gillespie in 1934. It was first recorded by Tommy Dorsey in 1935, but later versions were recorded by Frank Sinatra, The Supremes, The Jackson 5, The Beach Boys, and Glenn Campbell. Our favourite is Bruce Springsteen’s 1975 cover.

Q. Which controversial Christmas song was almost banned when it was released?

A. “I saw mommy kissing Santa Claus”, recorded by Jimmy Boyd at the tender age of 13. The song was almost banned in the 1950’s for “promoting physical intimacy” after uproar from a group of church leaders in the USA. Reportedly, the young Boyd was flown over to meet with the group to talk about the song in person and reassure them. And reassured they were: they quickly dropped their case against him.

Q. How long did it take for “Do They Know It’s Christmas?” to get played on the radio after it was recorded?

A. Only about 1 hour. According to Midge Ure, who co-wrote and produced the charity single, he was driving home from the studio having just finished the song when it was started playing on his car radio. “Bob made a cassette recording and took it straight to the BBC where they played it immediately, so I heard it over the radio while I was driving home, only an hour after leaving the studio.”

Q. Who's the biggest grinch in the rock world?

A. Ozzy Osbourne - he’s just not a fan of the festive season. To quote the man himself, “I f***ing hate Christmas”.

A tasting of the Christmas Pack
IPA Quiz: are you an IPA expert?
View all articles